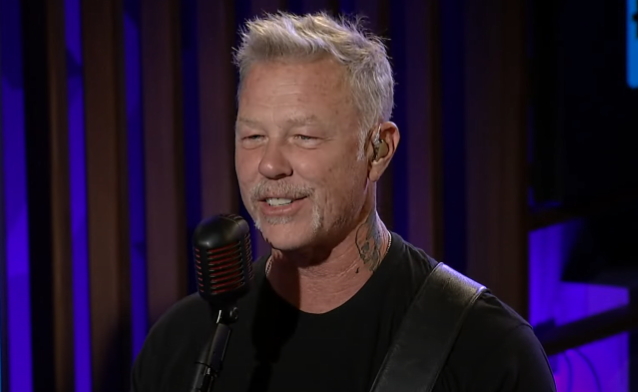 Listeners can expect to hear James intro songs from bands that he toured with over the years, such as ARMORED SAINT, MASTODON, VENOM, GOJIRA, CORROSION OF CONFORMITY, METAL CHURCH and more, beginning today at 5 p.m. and 9 p.m. ET.

"Road Dog Brothers" can be heard on SiriusXM's Mandatory Metallica at the following times:

Listen to a sneak peek below in which Hetfield reveals that he wasn't METALLICA's first choice for lead singer.

Other singers who were being considered for the frontman position in METALLICA included Jess Cox of Newcastle, England's TYGERS OF PAN TANG and John Bush of ARMORED SAINT (and later ANTHRAX),who actually turned the offer down.

Bush later said in an interview: "METALLICA did ask me to join, but I said no for all the right reasons. People must think that's crazy, but you have to remember the scene then. METALLICA was nobody. ARMORED SAINT was hot; you have to remember that. Also, I was very tight with the [ARMORED SAINT] guys, back to elementary school in fact. ARMORED SAINT was getting interest from all kinds of places, and we had a lot of people starting to turn up at shows."

He continued: "METALLICA came to see SAINT at a gig in Anaheim, at The Woodstock in 1982. I heard they were interested in asking me to join, which they did later. The thing was that METALLICA was this new kind of thing, and nobody back then. I don't care what they say now; nobody could have predicted what would happen. I didn't know the guys either, so there was no real interest. It was great to be asked — in fact, a lot of people asked — but ARMORED SAINT was really strong.

"Some time after 'Kill 'Em All' had come out, I heard the same thing again, but I never understood that because James was singing great then and he was doing a great job. I understood the lack of confidence back in '82 but not for 'Ride The Lightning'. James owns that record."

In a 1989 interview with Metal Forces, drummer Lars Ulrich talked about what METALLICA could have sounded like had Bush ended up fronting the group. He said: "Only a couple of days ago, we were actually sitting around talking about how it would be now if John Bush had joined the band. Obviously, it's impossible to know how different it would have been, but I can't imagine METALLICA without James Hetfield up there growling into the microphone, fucking curved over and everything. It's really weird to think about it. I mean, nothing against John Bush — I think he's a great vocalist — but ... Well, thank God it didn't happen."

Bush performed with METALLICA as a guest singer at one of the band's special 30th-anniversary shows in San Francisco in 2011. Video footage of his appearance can be seen below.