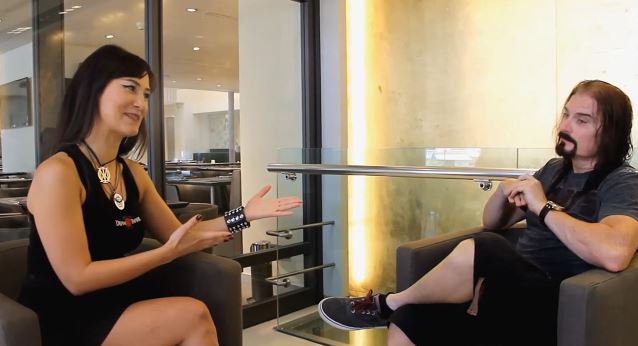 Vocalist James LaBrie of progressive metal giants DREAM THEATER was interviewed by Lady Obscure before the band's July 31 concert in Istanbul, Turkey. You can now watch the chat below.

Speaking about DREAM THEATER's mindset going into the songwriting process for the band's latest, self-titled album, LaBrie said: "We kind of knew before going into the album that it was going to be something that we could refer to, for all intents and purposes, as a self-titled album. And it is a rebirth, it is almost like getting back in touch with your roots… I guess redescovering yourself as a band, but at the same time staying relevant and contemporary. So I think we took all those things into consideration."

He continued: "We knew that with [2011's] 'A Dramatic Turn Was Events', it was an album that was to prove to the world that we really hadn't lost a step, even though an original member [drummer Mike Portnoy] had left the band. Still, we were going to maintain doing what we were, we weren't gonna lose that sound, we weren't gonna lose our identity. So with doing that with 'A Dramatic Turn Of Events', and proving that to the world, not only with the album, but, I think, with the [subsequent] tour, when it came time to sit down and do the next album, it was, like, OK, we've done that. Let's just really remain calm. Everything is peaceful. And let's just really dig deep inside and just get back and really prove to the world that, you know, this, to us, is really the begnnning of something new, and it sets the tone for the next chapter."

DREAM THEATER keyboardist, Jordan Rudess spoke to GetYourRockOut at this year's Sonisphere festival in the U.K. about whether the band has already begun thinking about the follow-up to last year's self-titled release. He said: "We haven't really gotten into serious band discussions about what's gonna happen next, although we've had little discussions between some of us about what we would like to see happen next. At the same, if I get a good idea in the middle of the night, or whatever, I'll record it onto my iPhone. I elected James [LaBrie, vocals] to kind of be the keeper of some of my ideas; I'll send him little YouTube clips of me playing something I think is cool. And then when it wraps around and we get into writing again and start our process, then we'll go back an see what we've got and kind of figure it out."