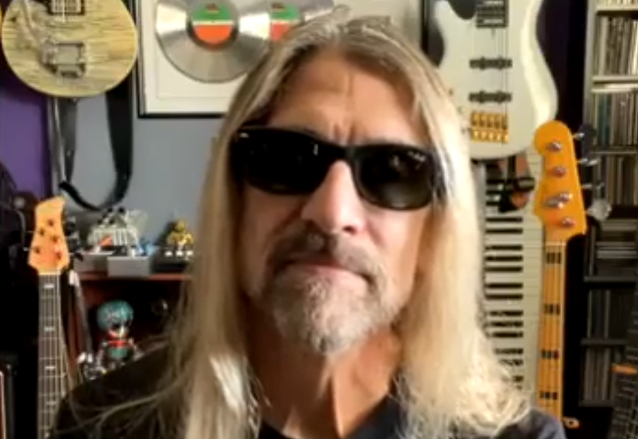 JAMES LOMENZO On MEGADETH's Setlist For 'The Metal Tour Of The Year': 'You've Gotta Keep The Hits'

During a new "The Metal Tour Of The Year" bassist roundtable video chat with Knotfest's Ryan J. Downey, MEGADETH's James LoMenzo discussed the setlist for the upcoming 2022 leg of the trek, which will kick off on Saturday, April 9 in Las Vegas, Nevada and hit a further 21 cities before wrapping in Allentown, Pennsylvania on Sunday, May 15.

"You have to take into account that Dave's [Mustaine, MEGADETH frontman] been through a lot with his voice, so a lot of the songs that we pick are predicated on [the fact] that he is healing correctly," the bassist said, referencing Mustaine's recent battle with throat cancer. "So that's part of it as well. But it's a long road ahead. We're always swapping in songs. We've got a whole pile — they're all sitting, waiting to be let loose. That's the great thing about being in this band, is that there's just an inexhaustible catalog.

"I don't know how to say this delicately, so I'll just say it. The truth of the matter is when you go to see a lot of your favorite bands — let's be the fan guy; okay, let's go to see our favorite band… I remember when JUDAS PRIEST was doing all of 'Nostradamus'," he continued. "It was a good record, but it wasn't 'Hell Bent For Leather'. And I've gotta say that people wanna hear the songs that they love. Why wouldn't you play them for 'em?

"So that's the problem with a band like MEGADETH," James added. "And there are bands, as we move along — all bands, as you move along, you start just getting this giant catalog. And how do you get enough in there to give the core fans what they really want as opposed to the esoterics? You try and throw a thing here and there, but you've gotta keep the hits, man."

The entire chat, which also included LAMB OF GOD's John Campbell and TRIVIUM's Paolo Gregoletto, can be seen below.

Two months ago, Mustaine confirmed that LoMenzo will play bass for MEGADETH when the band returns to the road next month. Joining them will be co-headliners LAMB OF GOD along with special guests TRIVIUM and IN FLAMES.

Mustaine has yet to reveal who played bass on MEGADETH's new album after Ellefson's tracks were removed from the LP following his exit from the group.

In July 2021, Mustaine announced during an episode of his Gimme Radio program "The Dave Mustaine Show" that Ellefson's bass tracks would not be used on the new MEGADETH album.

In early May 2021, Ellefson released a statement on Instagram denying all social media chatter that he "groomed" an underage fan.

On May 24, 2021, Mustaine — who formed MEGADETH with Ellefson in 1983 — announced the bassist's departure from the band.