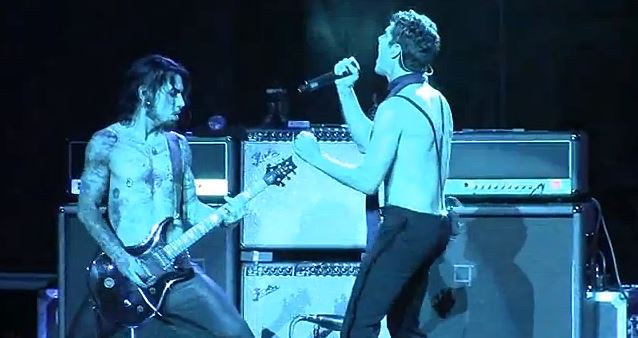 JANE'S ADDICTION: Quality Performance Footage Of 'Another Soulmate' From Chicago

Quality fan-filmed video footage of JANE'S ADDICTION performing a new song entitled "Another Soulmate" on August 22 at the First Midwest Bank Amphitheatre in Tinley Park, Illinois during the fourth annual Rockstar Energy Uproar Festival can be seen below.

"Being that we have a tour, I'm really happy that we have a good song that will serve as our calling card when we hit various cities," JANE'S ADDICTION frontman Perry Farrell told RollingStone,com. "JANE'S is kind of known for long songs; being this is a one-song single, I thought it'd be interesting to try and write a BEATLES-esque short song that would be fast and furious and it would just be fun, dig it and move on, short attention span."

In addition to JANE'S ADDICTION, Rockstar Energy Uproar Festival features ALICE IN CHAINS, COHEED AND CAMBRIA, WALKING PAPERS and DANKO JONES, among others.

Farrell talked to RollingStone.com about some of the other bands on the bill. "I've met the COHEED AND CAMBRIA kids; I like them a lot," he said. "I like how creative they are with their comic-book stuff; it's amazing that they're so into making comics and superheroes and things like that. It reminds me a little bit of the TOOL guys when I first met them and they were really into doing interesting and bizarre things with video. The ALICE [IN CHAINS] guys I've known forever; I knew them in their heyday and I've continued to stay in touch with Jerry Cantrell."

JANE'S ADDICTION released a concert document called "Live In NYC" on June 25. The set was issued on DVD/CD, Blu-ray and double LP vinyl, as well as standalone DVD and CD. The show was filmed and recorded at New York City's Terminal 5 on July 25, 2011, while the band was touring in support of its first studio album in eight years, "The Great Escape Artist".