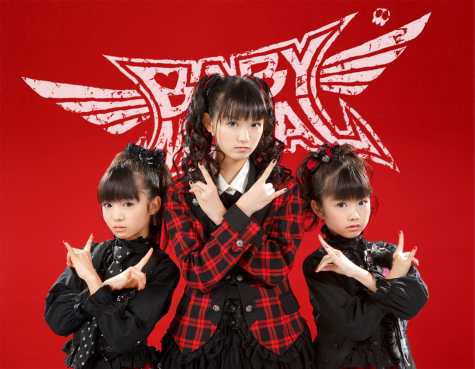 A new three-minute video message from BABYMETAL, a heavy metal offshoot of the Japanese pop idol group SAKURA GAKUIN that performs a distinctly Japanese mix of schoolgirl J-pop and death metal, about their new single, "Headbangeeeeerrrrr!!!!!", and their plans to travel overseas can be seen below (in Japanese, with English subtitles).

"Headbangeeeeerrrrr!!!!!" will be officially released on July 4 via iTunes.

BABYMETAL released a single, "Like!", on March 7 via iTunes. A video for the edited version of the song — which combines pop with extreme metal guitars, an occasional growl or two and a tinge of hip hop — was also made available.

Patrick Macias of the "Otaku-Verse-Zero" webshow recently travelled to Tokyo, Japan to interview BABYMETAL. You can now watch his report below.