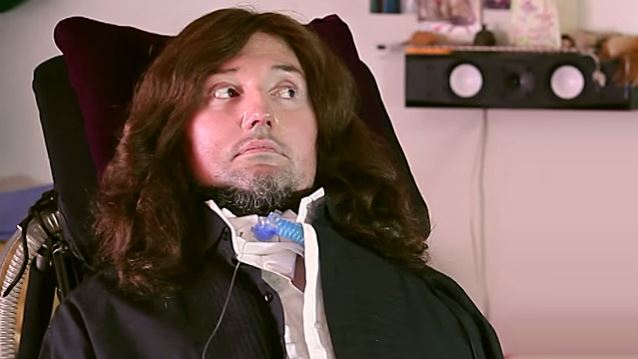 Mark Strigl of the "Talking Metal" podcast (web site) in December 2014 conducted an interview with Jason Becker, a onetime guitar prodigy first known as part of the metal duo CACOPHONY, who was diagnosed with amyotrophic lateral sclerosis (ALS, aka Lou Gehrig's Disease) at age 20, shortly after joining David Lee Roth's band for the gold-selling 1991 album "A Little Ain't Enough". You can now listen to the podcast using the Spreaker widget below. A few excerpts from the chat follow.

Talking Metal: Who were some of the original people who influenced you to start playing guitar?

Jason: It started with my dad, who played classic guitar, and then [Bob] Dylan, [Eric] Clapton, [Jimi] Hendrix, [Eddie] Van Halen and so on.

Talking Metal: An album that you released which is still considered a classic by so many people is called "Speed Metal Symphony". It was by the band you had with Marty Friedman called CACOPHONY. It came out in 1987 and was released through Shrapnel Records. So many years later, 27 years later, how do you believe the album has held up? Has it held the test of time?

Jason: I think it holds up well, especially the guitar melodies and ideas.

Talking Metal: This is a band, CACOPHONY, that Mike Varney had a hand in putting together. How did you first meet Mike? Was it the typical way of sending a tape into Guitar Player magazine?

Jason: Right. And then he called me and suggested I go jam with Marty.

Talking Metal: Is it fair to say that Mike Varney had the vision for CACOPHONY, one of the first bands to have two intense musician guitars player shredders in one band? Was that his vision?

Jason: Definitely, but also Marty too. Marty also came up with the name CACOPHONY.

Talking Metal: "Perpetual Burn". Any memories you can share about recording that album?

Jason: It was such a blast to record. I was given total artistic control. I just had fun doing everything I wanted. Marty produced it, and we had fun. The drummer had influenced me too.

Talking Metal: When you look back on those early albums — "Perpetual Burn", "Speed Metal Symphony", "Go Off" — is there one that stands out and is your favorite out of the bunch or are they all pretty equal?

Talking Metal: You mentioned that Marty Friedman produced your record, but let's talk about Richie Kotzen. You were really the first guy to go into the studio with Richie and record with him. He has gone on to have such an incredible career from MR. BIG to THE WINERY DOGS to all his great solo records. Memories of producing his first album?

Jason: Yeah, we were both teenagers so we had so much fun. I remember he kept farting in my face, so I threw my gum in his hair.

Talking Metal: You replaced Steve Vai in David Lee Roth's band for the "Little Ain't Enough" record. Let's talk a little about that record. It was produced by Bob Rock. Any memories of being in the studio with him that you could share with us? Was he easy to work with? Was he a slave driver?

Jason: Well, he was easy to work with. He was happy with most everything I came up with. Of course, at times I was also struggling with weakness in my hands, so that made it extra tough. He had to play one of my clean rhythm parts, which sucked for me because I was so stoked to play guitar on a Roth album.

Talking Metal: Let's talk a little more about that record. One of the heaviest, hard-rocking songs on the record is "It's Showtime", which is a song you actually wrote with David Lee Roth. Was that a completed song you brought to Dave and he added lyrics and a vocal melody or was that something you two sat down with guitars and came up with riffs together? How did the writing process go for the specific song go with David Lee Roth?

Jason: I wrote it alone first, then he put lyrics and the melody, so, unfortunately, not a very romantic story.

Talking Metal: Was it a similar situation with the song "Drop In The Bucket", which you also wrote with him?

Talking Metal: Were there other songs that you recorded with him that didn't make the final cut or are we hearing everything that was done for the record on the actual album that was released?

Jason: Yeah, there were a couple that didn't make it. I think might put them on my next album, but they won't have Dave's singing.

Talking Metal: So, just to clarify, there were these songs that you worked on with Dave that didn't make the album. Were they fully recorded? Did you lay them down in the studio? Did Dave record vocals for them and are they completed tracks? Are they sitting in the vaults somewhere with David Lee Roth's voice and your guitar on them?

Jason: Yes, one was totally recorded, but Dave's track was just a scratch track.

Talking Metal: After the album, Dave went out on tour. Was there ever any talk of you doing the tour with Dave? Were there rehearsals for the tour with you?

Jason: Yes. We were planning on going on tour, but when I was helping Dave, I auditioned some other players for the tour. I was having a hard time standing and playing. My legs would shake, so I had to sit the whole tim. After that day, Dave and I talked and we decided I wouldn't tour. He was depressed. I tried to make jokes and pick up his mood, but that didn't really work.

Talking Metal: When you were playing and rehearsing with David Lee Roth, were you doing any of the old VAN HALEN songs or solo-era David Lee Roth stuff off "Eat 'Em And Smile" or "Skyscraper"?

Jason: Yeah, and they were done on my audition tape. I remember playing "Yankee Rose" and "Ain't Talkin' 'Bout Love" and "Skyscraper" and "Jump", "Hot For Teacher". It was such a blast!