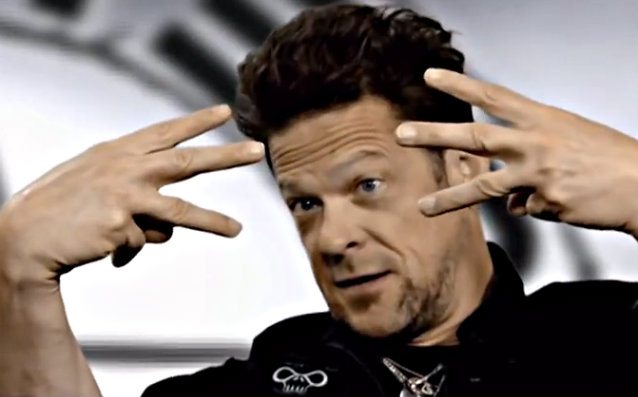 This past summer, Terry "Beez" Bezer of Scuzz conducted an interview with former METALLICA, VOIVOD and FLOTSAM AND JETSAM bassist and current NEWSTED frontman Jason Newsted. You can now watch the full chat below.

"King Of The Underdogs", the new video from NEWSTED, was filmed in September in Oakland, California with director Leon Melas, who previously helmed NEWSTED's video for the track "Soldierhead".

In a recent interview with Revolver magazine, Newsted stated about the lyrical inspiration for "King Of The Underdogs": "'King Of The Underdogs' is kind of a personal thing almost. It's, like, the highest rated of the underrated. I think people are rooting for me to win as they do with underdogs."

"King Of The Underdogs" is featured on NEWSTED's debut album, "Heavy Metal Music", which sold nearly 8,000 copies in the United States in its first week of release to land at position No. 40 on The Billboard 200 chart. The CD was made available on August 6 in North America via Chophouse Records/Collective Sounds and August 5 in Europe through Spinefarm Records. Jason told Billboard.com the 11-song album was very similar to the band's debut EP, "Metal", which opened with around 6,200 units to debut at No. 62. "The EP was always intended to be the primer, a sampler of what was to come on the LP," he said. "It's all metal all the time. It's not all fast, but it is all heavy."

Regarding how the material for NEWSTED's debut album came together, Jason told Loudwire: "It started out as my seeds for the first eleven songs that I made on my GarageBand thing. I wrote all the tracks — guitars, bass, drums, everything and gave them to Jessie [Farnsworth, guitar] and Jesus [Mendez Jr., drums] and had them go learn it, put their artistry on it and so it was collaborative in that way for the first batch. Like the four songs on the EP came from that initial eleven, so that's how those songs went. Each day as we get deeper into the songs, the collaboration gets deeper as well. I have come a long way from my tunnel vision of 'Only my ideas are good enough' bullshit, and I'm a lot more open to everyone's ideas and the artistry of each person to make it what it is. And three heads is better than one and that kind of thing. So it has become more collaborative as we go. I've written ten more since that time in October last year and a few of them have made their way onto this LP now. Once again, they were all my seeds, but now that we have [STAIND's] Mike Mushok in the band and I give the music to all three of those guys, now I have three great artists bringing back their responses and their counterpoint playing to my ideas, so it's becoming more and more collaborative every day and on this LP there will be shared writing credits on at least half of the songs with the writing credits now."

"King Of The Underdogs" video: