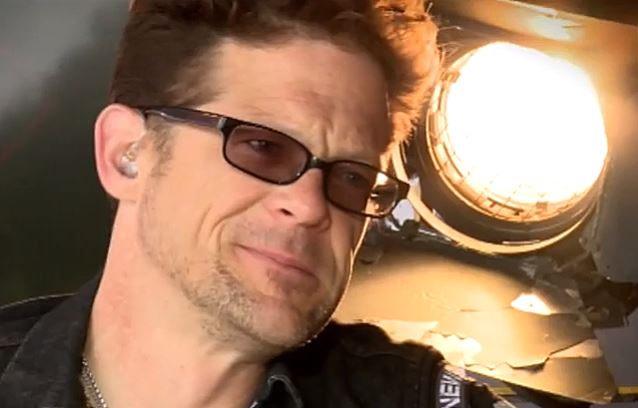 JASON NEWSTED: 'It's So Important In My Life To Keep Challenging Myself'

Alec Plowman of Ultimate-Guitar.com recently conducted an interview with former METALLICA, VOIVOD and FLOTSAM AND JETSAM bassist and current NEWSTED frontman Jason Newsted. A couple of excerpts from the chat follow below.

Ultimate-Guitar.com: "Heavy Metal Music" is an album with a definite, balls-to-the-wall, old-school vibe. Would you say that recording it allowed you to get back to your roots?

Jason: Yes, in many different ways. It's the first time that I've really beared down and wrote all the songs top to bottom; all the parts, all drum programming, all lyrics and all voice. So it's quite ... going back to roots. Like the FLOTSAM AND JETSAM days, where I would do close to the same thing, composing songs from the get-go. So, in that way, it's old school. Also, in the way that we did everything here in my garage, in my studio. It's my old equipment and all those things. In a very old school way we go in together and play all the songs together; very few overdubs, let the mistakes go and let as much human factor exist as possible. For all of those reasons, yes, it's old school all the way.

Ultimate-Guitar.com: I was wondering if your time off the scene and away from the limelight has affected your approach to making music?

Jason: I think it affected it in the way of appreciation. I'm coming back into it after trying to get away from it, in any serious manner, for a long time. I did some underground stuff with VOIVOD and did ECHOBRAIN records and many other recordings with different people of different styles ... there was always music. I couldn't go for seven or eight days without having a jam session with some of my friends somehow or other, whether it was a jam on the porch or a full-blown live session in the studio or whatever. I had to keep the music going in order to keep my balance. So I kept it alive the whole time. But coming back to it in a serious manner ... it all was for a reason. I never planned on having a band of my own like this, coming back out and being in the business again or anything like that, let alone having anything with my name on it. Never ever. I thought I was retired. I retired from METALLICA, I retired from any kind of heavy touring. I'd do one-off shows and do keg parties with PAPA WHEELIE and different stuff like that, but I'd never planned on being in the big time again. So now that I'm back ... I guess there's a reason for all of that. I was gone long enough to really enjoy it again this time.

Ultimate-Guitar.com: You mentioned that NEWSTED is the first project that we have seen you fronting. Does being in that position daunt you at all, and does being a front-man change the way that you approach live performance?

Jason: It's not daunting. It's only challenging. There's a nervous excitement to being able to present myself and to show off again in a different way, to wear all these new hats and all that stuff. I have bitten off a pretty big bite to chew now, but challenges are what make us get better and keep us alive. The particular scenario of mine ... it's like a guy who hits the dot com boom or someone who wins the lottery ... all of a sudden, you've got a whole bunch of freakin' money and all the time in the world, and you have to challenge yourself so you don't go soft, or get drunk, or get addicted to gambling, or go fucking mental or whatever. I found myself in that situation after I left METALLICA, with all the money in the world and all the time in the world to do whatever I wanted to do. And so I really had to figure out how to create challenges for myself. And so from the time I left that band I've created challenges for myself in VOIVOD, ECHOBRAIN, all my art pieces, SEPULTURA, jamming with different players, and now this great challenge, some 12 years after I left METALLICA. It's so important in my life to keep challenging myself so I continue to stay alive.

Ultimate-Guitar.com: To pick up, again, on something you mentioned, you suffered a shoulder injury in 2006 that resulted in you being unable to play for some time. This led you to take up painting. I was wondering if your working in another creative medium had affected the way that you approached making music once you recovered?

Jason: There's a direct correlation. No question about it. It's the same kind of wild colors that go on the canvas that go into the music. The collectors so far ... I know a dozen people that collect multiple pieces ... and their consensus is that the paintings look like the music sounds. The intensity of the music is matching the intensity of the artwork. It's from the same hands and head and heart. The way that I go about either of them ... they help each other along. Painting helps the music, music helps the painting in a way of seeing how things go together. Some colors really go together, some really won't. Some notes will work really well together and some really won't. I think it's helped me stand back and look at it a little bit deeper than I would have before. That's what I learned taking the ideas of painting to the music. I step back from a song, look at it a little bit deeper than I would have in the past. That's maybe why we have some of the compositions that we have on the "Heavy Metal Music" LP; because I've taken a little more time with the compositions as opposed to PAPA WHEELIE songs and stuff like that where I just blast through them. There, whatever it is, it is. You put the microphone in the room, blast through the song, and boom, you've got the record. On these ones, I took a little more in depth look, like I would with a painting.