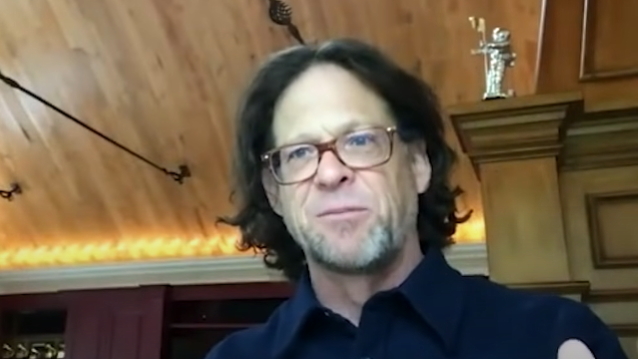 JASON NEWSTED Says He's Been 'Really, Really Frugal' With His METALLICA Earnings: 'That's Why I Still Have Them'

In a recent interview with the METALLICA fan-club magazine So What!, the band's former bassist Jason Newsted was asked how he dealt with the huge commercial success of METALLICA's 1991 self-titled album — better known as the "Black Album" — when it first happened. He said: "All of us experienced some kind of swelly head at different levels for different amounts of time through this three-year span. [It was] inevitable and impossible for it not to happen… I remember me personally, when I went shopping with [METALLICA guitarist] Kirk [Hammett] in Paris, and he took to me a couple of nice, nice stores, and I threw down a lot of money for some nice clothes and shoes and stuff. I'd never done that before. And I thought I was the shit… So I did get caught in the moment. I think that I've been really, really frugal with my earnings, and so that's why I still have them. But I did have a couple of moments there. But that was the time — dropping all this money for wine and fancy shit… And I think it lasted for about — I'd say five to six months, for myself, that it was just that 'walking on air.' Everywhere that you went, in the 55 countries that we played in, they're waiting for you when you fucking there… What are you supposed to do?"

When asked how he "caught himself" before going off the deep end, Newsted said: "I think when I came back home on the one break to be with my girl again, I just realized that that's not who I am. It just is not who I am. I pretended I was gonna get this fancy car and all that shit. I'm, like, 'Dude, you know that you'd rather have a '65 Mopar, '68 Mopar than you would that fucking Lamborghini bullshit anyway.' But those guys were driving Porsches and fancy cars and stuff, and I'm, like, 'I can afford that too.'"

You can now watch So What!'s entire one-hour interview with Newsted in four parts below.

Jason left METALLICA in 2001 but was inducted into the Rock And Roll Hall Of Fame, along with guitarist/vocalist James Hetfield, drummer Lars Ulrich, Hammett, and the man who replaced him, bassist Robert Trujillo, in 2009.

To commemorate its 30th anniversary, the Grammy-winning, 16-times-platinum-certified Black Album received its definitive re-release in September via the band's own Blackened Recordings.

In October 2020, Newsted bought a home on Skaneateles Lake in the village of Skaneateles, New York for $6.1 million.