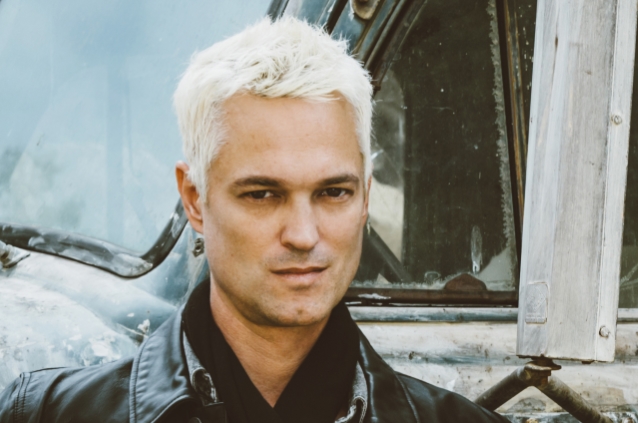 JEFF GUTT On His First Rehearsal With STONE TEMPLE PILOTS: 'It Was A Little Awkward'

New STONE TEMPLE PILOTS singer Jeff Gutt has admitted that his first rehearsal with the band two years ago was "a little awkward." "It felt like I needed their permission, in a way, to take ownership of the songs — I couldn't just walk in and do it; it would have felt wrong to me," he told Cameron Buchholtz of the Rock 100.5 The KATT radio station in a new interview (hear audio below). "So it was more of a personal thing about getting to know them as people and them getting to know me and then pretty much letting me know it was okay to go do that, 'cause to take the reins on something like that, you really need their blessing, so to speak."

According to Gutt, his first rehearsal with STP saw him performing the same seven songs that "they had everyone doing that was coming in." He said: "I was one of the very last people to go on one of the very last days. That was seven songs, and after that, I couldn't get a setlist; I had to pretty much go through every single record, just going over everything constantly for months. So it was a lot… I pretty much knew most of [the songs] anyway, but there were a couple of records that weren't ingrained in my memory, so I had to go over those a little more."

Jeff said that his STONE TEMPLE PILOTS bandmates weren't initially aware of his connection with the group's former singer, Chester Bennington. "No, they didn't know at all, actually. We did a couple of those private showcase things, and Chester actually called and asked if he could come to the first one, 'cause he wanted to see my first performance with STP. So he was on my guest list. And they were looking over the guest list, and they go, 'Wait. Chester is on your guest list. How do you know Chester?' So I went through the whole story. And then he came, and I brought him up to do a song, and it was great."

Gutt's first performance as the singer for STONE TEMPLE PILOTS reportedly took place at a secret L.A. industry showcase in November 2016 — a full year before the onetime "The X Factor" contestant was officially announced as the group's frontman.

Jeff previously told Yahoo! that he had known Bennington since 2001. "I was in a band called DRY CELL, and we were signed by the same guy that signed LINKIN PARK, so that's how I knew him," he said. "He would come to some of our writing sessions and rehearsals; I'd see him in the studios that we were at. When we were recording, they'd be recording there. We just had a good friendship."

STP's self-titled seventh studio effort was released in March and is the band's first with Gutt.

STP recently joined forces with BUSH and THE CULT for the first time for the "tri-headlining" "Revolution 3 Tour". The North American amphitheater trek began on July 18 in Nashville and hit an additional 19 cities over six weeks before concluding in Phoenix, Arizona on September 2. Each group performed a full set in a different order each night.