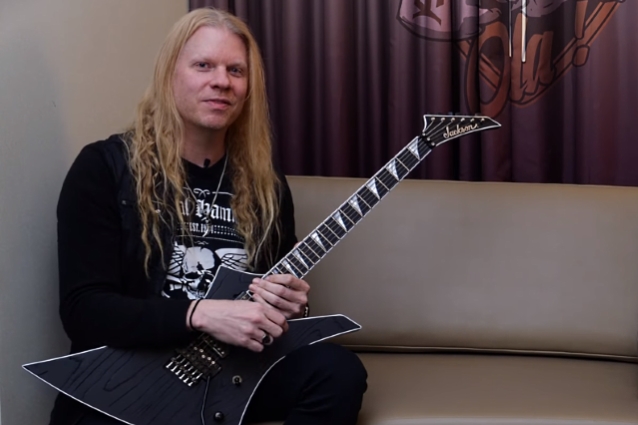 During an appearance on "The Riffhard Podcast", ARCH ENEMY guitarist Jeff Loomis revealed that he has spent much of his coronavirus downtime recording a new solo LP. "It's my third solo album for Century Media," he said (hear audio below). "It's gonna be an all-instrumental thing. So, really, I've just been keeping busy doing that [and] doing guest solos for people. I'm actually writing a little bit of music for video games."

Loomis also said that is he is "doing solos for the new ARCH ENEMY album." He added: "I don't even know when we're going to release that yet, but I'm gonna start work on that very soon. We have a tentative tour coming up for September, if that happens. Let's hope so."

Jeff, who was the main songwriter in his previous group, NEVERMORE, joined ARCH ENEMY in late 2014, but was not involved in the writing for the latter act's latest album, 2017's "Will To Power".

Four years ago, ARCH ENEMY guitarist Michael Amott said that Loomis is "a strong songwriter" in his own right, "but not in the style of ARCH ENEMY, I feel. He's always writing and recording with his own stuff," he explained. "He has a project called CONQUERING DYSTOPIA, he has his solo stuff, [and] he obviously wrote most of the NEVERMORE stuff. I've always respected him, and continue to respect him, as a guitar player — he's amazing and an amazing human being; he fits in perfectly. [There's] a great chemistry [between us]. But, you know, I've always written most of the music, so it's difficult to… I don't really wanna change the sound of the band too much. The band sort of started around my songwriting and my ideas, and those continue to be the most dominant ones, I guess. But, you know, who knows [what can happen] in the future?"

The special tour edition of Loomis's latest album, "Plains Of Oblivion", was released in April 2013 via Century Media.

Loomis's second solo record, "Plains Of Oblivion" was produced by Aaron Smith (7 HORNS 7 EYES) and featured cover artwork by Colin Marks of Rain Song Design, who had previously worked with ALL SHALL PERISH, THE END and XERATH.