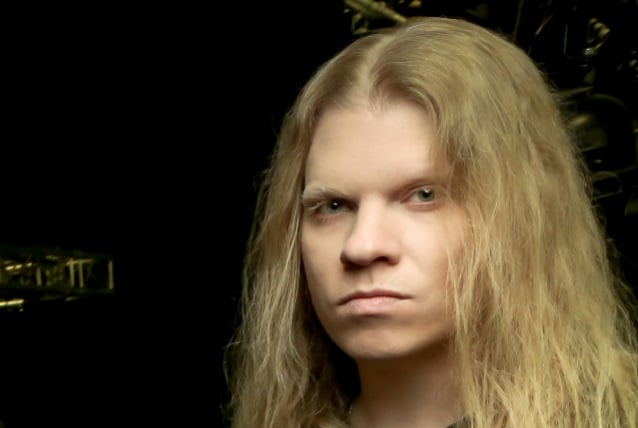 Jeff Loomis says that he will probably be grieving over the death of his onetime NEVERMORE bandmate Warrel Dane for a long time.

NEVERMORE effectively split up in 2011 when Loomis and drummer Van Williams announced their departure from the band due to personal differences with Dane and bassist Jim Sheppard. Warrel later described NEVERMORE in an interview as "the greatest band that alcohol ever ruined."

Asked how he is coping with Dane's recent passing, Loomis told All That Shreds: "I hadn't seen Warrel too terribly much, maybe just a few select times since the band broke up. He passed away when I was at home during Christmas break from touring with ARCH ENEMY. It was a terrible experience for me to go through as with anyone who loses a close friend. I'm still grieving over it and I probably always will be for a long time. Primarily when you've known somebody for so long and toured the world and wrote music together, you become very close like brothers, and that's what we were.

"To make a long story short, Warrel was a troubled guy, he had issues with alcohol and at one point so did I. I would never single him out and say he was the sole issue of why we broke up as a band. I was a terrible drinker at one time in my life. I've been sober for five years now. I've gotten my life together and I've got a very clear and focused mind, and health-wise, I'm doing very well. When Warrel continued to drink, it just kept me from really talking to him a lot. I just wanted to keep my distance from that kind of thing because I was trying to live a cleaner lifestyle. The times that I did speak with him or texted him, it was always very friendly, and we told each other how we missed one another. There were some talks about doing a reunion and writing some more songs. So that was something I was kind of excited about, and, unfortunately, you know, that will never happen now."

He added: "I have fantastic memories and killer music that we wrote together, and that will always be a great reminder of what we shared. I'm going to miss him very much. He was a great friend of mine, and I can't say enough good things about him. He was an incredible lyricist and an incredible vocalist as well. He was a very different person, a tough one to figure out. He was intense with his lyrics and a brilliant guy."

Dane died on December 13 in São Paulo, Brazil at the age of 56. The musician reportedly had a heart attack during the night and could not be revived.

According to guitarist Johnny Moraes, who played in Warrel's solo band, Dane had a history of addiction and other health issues. "His health was already very weak because of his diabetes and his problems with alcoholism," he said.

The instrumental parts for Dane's follow-up to 2008's "Praises To The War Machine" solo album were almost completed and he had begun laying down his vocals shortly before his death.

Dane told "The Jasta Show" in a 2016 interview that he "rarely" talked to Jeff, who is now in ARCH ENEMY. But, he insisted, "we don't hate each other. We're not enemies. We're still friends — friends that rarely speak to each other, unfortunately."