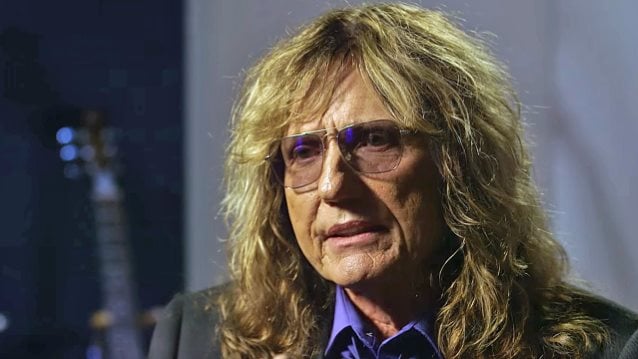 WHITESNAKE's DAVID COVERDALE On Secret To His Success: 'I Just Care Very Deeply About What I Do'

WHITESNAKE frontman David Coverdale was recently interviewed by Meltdown of Detroit's WRIF radio station. You can now listen to the chat using the audio player below.

Asked what he thinks has been the key to his success and longevity, Coverdale quipped, "Being fabulous," before adding more seriously: "Just loving what I [do]. You know, I have no idea. I remember George Harrison saying something years ago: 'If I knew, I'd become a manager and sign shitloads of bands, if I knew what the recipe for that was.' I just care very deeply about what I do. I think the people who support me are completely conscious of that. I give them… whether it's good enough or not, but I give them the best I've got, and I always have, from the time I performed with DEEP PURPLE through to whatever the show is. If I'm ill, I'm still gonna give you everything I've got. It might not be enough sometimes, but it's everything I've got."

WHITESNAKE is in the process of mixing its long-awaited new album of all-original material, "Flesh & Blood", for a tentative summer release via Frontiers Music Srl. The record will mark the first time he has written with WHITESNAKE guitarists Reb Beach and Joel Hoekstra.

Coverdale told SiriusXM's "Trunk Nation" earlier this week that the follow-up to 2011's "Forevermore" will "be the best WHITESNAKE album. I know that's clichéd stuff, but I know what I'm talking about. I should do after almost 50 years," he explained.

The band will celebrate the release of "Flesh & Blood" by embarking on the "Juke Box Heroes Tour" this summer with FOREIGNER and Jason Bonham. There are also plans for Coverdale to release a deluxe edition of WHITESNAKE's 1984 album, "Slide It In", in the fall, as well as a collection called "Whitesnake Unzipped: Acoustic Journeys Through The Years" in time for Christmas.