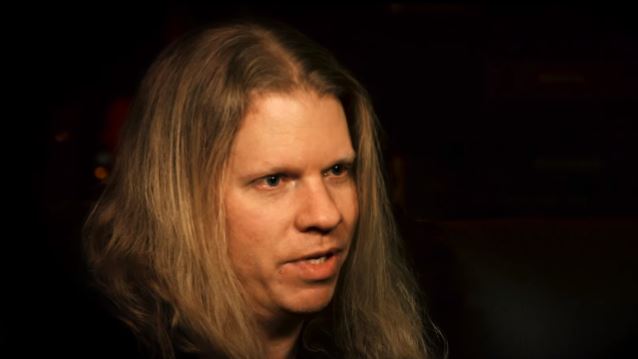 Former NEVERMORE and current ARCH ENEMY guitarist Jeff Loomis confirmed to Sweden Rock Magazine that he auditioned for MEGADETH for the first time when he was only 16 years old but was deemed too young and inexperienced at the time by MEGADETH leader Dave Mustaine. "I had another opportunity [to try out for MEGADETH] back in 2008," he revealed. "During the 2005 [edition of MEGADETH's] Gigantour [which featured NEVERMORE on the bill], Glen Drover was playing in the band and he didn't want to be in the band anymore. Around 2008 I believe it was when I was just entering the studio to record my very first solo record, when I got a phone call from Dave. He was, like, 'Jeff, it would be great if you could come out and play two live shows with us. We kinda need you. Glen can't make the shows.' I was, like, 'Man, Dave, I'm right in the middle of recording.' I literally just entered the studio and was about to track the first song of my first solo album. I said I just couldn't do it. Right there and then I kinda blew it. I mean, the next day I think they had another guitarist who was Chris Broderick. So, yeah, I had another opportunity, but it was my fault. I blew it and there you go — that was it! [laughs]

Asked if there were any other bands that he tried getting into over the years, Jeff said: "I auditioned for Ozzy Osbourne before Gus G. got the gig. I actually flew down to Los Angeles and played five songs for Ozzy and Sharon. I jammed with the band and Ozzy basically just watched from the couch with Sharon. He's, like, 'Fucking bloody fantastic guitar playing, man! That's fucking amazing!' Then Sharon came up to me and said, 'Jeff, how old are you?' I'm, like, 'I'm 38.' 'Oh, okay. Thank you.' Right then and there I kinda knew that they were looking for a younger guy. I thought for sure I had the gig, though, 'cause I nailed all the songs. A month later, I heard Gus G. got the gig, so I was a little bit upset about that. It would've been cool to have been Ozzy's last guitar player. That would've been kind of a legacy thing, but, unfortunately, I didn't get the gig."

Loomis came in at No. 61 on Sweden Rock Magazine's 100 greatest hard rock/metal guitarists of all time, as voted by the readers.

Jeff joined ARCH ENEMY in 2014 — three years after his exit from NEVERMORE.