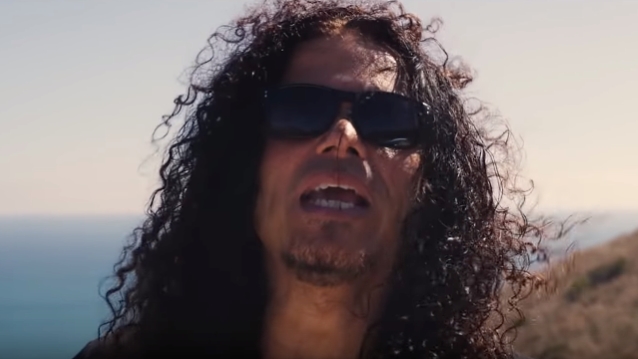 On the new SOTO album, "Origami":

Jeff: "With SOTO, by design I wanted this band to be heavier than a lot of the things that I've been doing the past years of my career. SONS OF APOLLO is quite heavy, but SOTO's got a couple notches heavier than some of the stuff I've been doing the past years or so. I kind of missed that side of my life and my music. It's funny, because I've been doing so many melodic rock or AOR kind of records for so many years, or even hard rock records, a lot of people tend to forget that I started my career in heavy metal. I was with Yngwie Malmsteen. That's pretty heavy-duty. Even 30-something years ago when I started with him, it was pretty heavy music. Then everybody's like, 'Oh, I don't like Jeff doing this heavy music. He should do what we're used to hearing him doing.' I'm like, 'Listen, assholes — I started with heavy music. I want to go back to heavy music. Stop! [Laughs]"

On his motivation to stay busy:

Jeff: "Especially as we get older, you realize how short life really is. I don't want to have any regrets in life. I don't want to be on my death bed going, 'Man, I wish I had done this. I wish I had done that.' I'm going to do it while I'm healthy and active and alive and I have a voice to do it, because some day, I might not be able to do all of this, and some day, I might have to slow down and settle down and not really do as much as I'm doing, so I'm going to take advantage of it while I can... I learned this work ethic from Freddie Mercury, who was my hero musically and vocally and as a performer. When he knew he had AIDS and he knew his time was limited, he told the guys in QUEEN, 'Listen, I don't want to talk about the disease. I just want to work. I want you to get as much out of me as I physically and possibly can before I go.' That, to me, says so much about what that guy stood for as an artist, as a performer. I'm so inspired by that thinking and that ideology. I want to be that kind of artist."

On the differences between SONS OF APOLLO and SOTO:

Jeff: "SONS OF APOLLO, it's more Derek's [Sherinian] and Mike's [Portnoy] vehicle, so even though they give me the freedom to write and create and do my stuff, what I do, for the band, it still has to be decided and agreed upon by Derek and Mike in the end. They're the producers; they're the ones that basically started this thing, so they're overseeing everything. With SOTO, it's almost the exact opposite. The shoes are on my foot. I'm the one that decides; I'm the overseer; I make the final decision. We are a band, and these guys, I let them be completely them. I don't stifle them — I don't say, 'Don't do this' [or] 'change that' — but in the end, I've got to say it's right. When it's right for me, then it's right for us... I'm way more hands-on with the final decision on everything, but I really trust and put a lot of trust into the guys in the band to help me deliver exactly what I have in my head. I wouldn't sell it as a band if it really wasn't a band. To me, that's lying to the audience; that's lying to the band. But because I have the most experience in the band and the reason why we're signed [and] in the general sense of the band existing is because of me, from that, I want to retain that level of the final say."

On the status and direction of the forthcoming sophomore album by SONS OF APOLLO:

Jeff: "Most of the basic tracks are done. I think Bumblefoot's doing a lot of solos now, and Derek's doing a lot of keyboard overdubs. I have three songs finished, and I just wrote a fourth one yesterday... We're cruising along. We're taking our time. We're doing it together. Everything that I sing, I send it to Derek, Mike and Ron. Billy [Sheehan], not so much, because it's more or less Derek and Mike overseeing the production, and I have to send it to Ron, because sometimes, he's doing guitar parts that might have to be changed. Whatever melodies I come up with, sometimes I come up with things that might rub against some of the musical ideas. He'll say, 'Hmm, I like what you're doing here better than what I'm playing, so let me see if I can some up with something that matches more what you're singing so you don't have to change it.' Regarding the direction, we're not veering away too far from the original seed that we planted from 'Psychotic Symphony', and it's mainly because that seed is now just starting to sprout up like a little tree. If we go down and chop that tree down by starting something new and completely left-field, we're going to alienate our audience. We already know what we want to build with SONS OF APOLLO. This next album is going to solidify that build."

On his ongoing involvement with TRANS-SIBERIAN ORCHESTRA:

Jeff: "I will be a part of TRANS-SIBERIAN ORCHESTRA as long as they have me. Every year, I ask them before I make any scheduling, before I plan anything for November/December, I always ask them, 'If you're planning to use me, please let me know. I will make sure my calendar is clear.' I want to continue with them as long as they will have me. I'm doing another [TSO tour] this year, and I'll do every one, every year as long as they want me involved. They've given me a loyalty of making me a part of that family for so many years. We're going over a decade now. The least I can do is give them the same loyalty back and the same respect that they've given me. I would want to be a part of that as long as they'll have me."

SOTO's third album, "Origami", was released on May 24 via InsideOut.

The as-yet-untitled new SONS OF APOLLO album is expected to be released in January of 2020, also via InsideOut.

Soto joined TRANS-SIBERIAN ORCHESTRA's "West" touring troupe in 2008, a year after his year-long stint with JOURNEY came to an end. He appears on the two most recent TSO albums — 2009's "Night Castle" and 2015's "Letters From The Labyrinth".