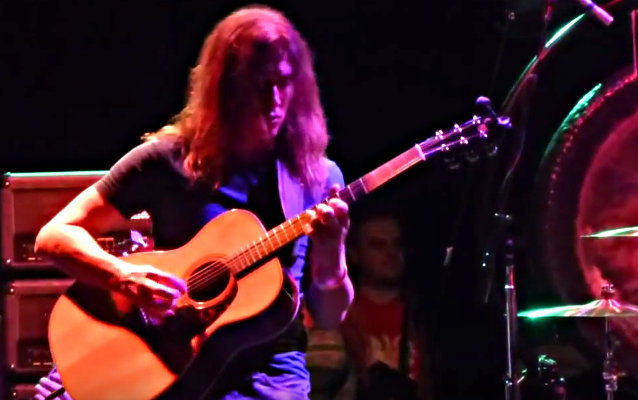 Former MEGADETH guitarist Jeff Young says that he would "jump" at the opportunity to return to the group for a reunion tour, explaining that "it would be about the music and the fans."

Jeff's entire career with MEGADETH was spent recording and touring in support of the band's 1988 platinum-selling album "So Far, So Good...So What!" He left MEGADETH shortly after an appearance at the Monsters Of Rock festival, with the band's leader, Dave Mustaine, accusing the guitarist in the press of lying, saying that "everything that came out of that guy's mouth was just the highest grade of pure horseshit."

Asked whether he would rejoin MEGADETH if Mustaine wanted to reform the band's "So Far, So Good...So What!" lineup for a series of shows to celebrate the album's thirtieth anniversary, Young told EonMusic: "Yeah, I don't have to hesitate. I don't know that that would ever happen, because, first of all, Kiko [Loureiro, current MEGADETH guitarist] is a buddy of mine. We are friends, and he's been on my radio show. He's super sweet, and I think he's great in the band. But that album was great, and do you know how hard it is to make money in the music business right now? I think I'd have to jump at that tour, and I'd have to be a big boy, regardless of the history between us. For me, it would be about the music and the fans, just doing it to honor that album."

Jeff made headlines in December 2009 for accusing Mustaine of, among other things, "dissing, exaggerating and just plain lying on some level about nearly every talented musician that has passed through his dysfunctional little ensemble." He also also disputed Mustaine's claim in an interview that Young's drug problem led to MEGADETH's 1988 Australian tour being called off and the group being "banned" from performing in the country.