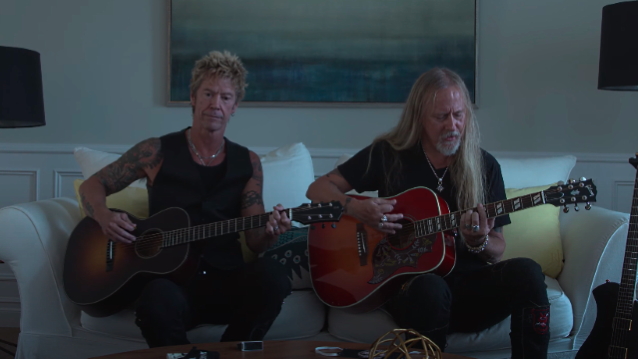 On Sunday (June 27),ALICE IN CHAINS guitarist/vocalist Jerry Cantrell and GUNS N' ROSES bassist Duff McKagan were reportedly at a photo studio in Los Angeles shooting a video for a single from Jerry's upcoming solo album.

A couple of photos from the set of the video shoot — courtesy of a woman who appears to be starring in the clip — can be found at this location.

Cantrell's brother has said on social media that the album is due in October, although no label has been announced and no formal release date has been set.

Cantrell's upcoming effort will mark his first full-length release since "Degradation Trip", the epic solo album he made in 2002 with future METALLICA bassist Robert Trujillo and FAITH NO MORE drummer Mike Bordin.

Cantrell discussed his plans to record and release new solo music during a pair of interviews he gave in January 2020. While chatting with Gibson about his new collaboration with the guitar maker, Cantrell touched upon his solo activity, saying: "I've been in this band, in ALICE IN CHAINS, since 1987, so 33 years. And that's always been my first love and my commitment, but I did have the opportunity to make a couple of solo records, and since we started the band back up, I really didn't have the opportunity to revisit that.

"[ALICE IN CHAINS] just finished touring in September [2019] off of 'Rainier Fog', and we generally take about a year off when we're done touring anyway — just give it a rest for a second and then get it reinvigorated and focus on what's new. So we're gonna take a year off, so I thought I'd maybe do some shows and I'm working on some music as well."