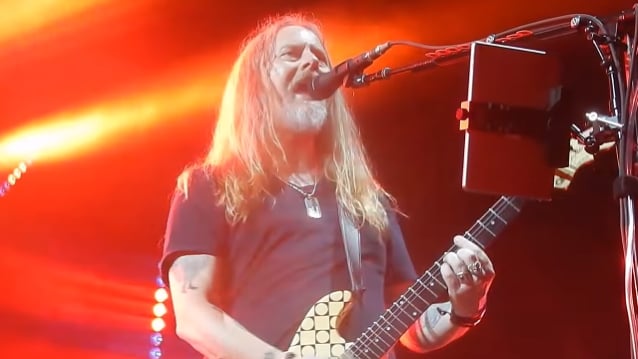 During an appearance on a recent episode of "The Art And Span Show" podcast, ALICE IN CHAINS guitarist/vocalist Jerry Cantrell spoke about his songwriting process and how knows when a musical idea is suitable for his band.

"More often than not, I'm right," he said (hear audio below). "Not all the time. There were plenty of times where I thought something is cool and I'll put it down and I'll lay it down, and then we'll either revisit it later or when the band plays it, it's, like, 'Eh. I guess that isn't as cool as I thought it was.' But I have been really lucky to… When I pick up and instrument, and it happens to me a lot when I actually pick up new instruments — instruments that I haven't played. It's a guitar, it's got six strings, but it's a different guitar than I've played. I'll come up with an idea. And they happen all the time. One just happened to me today at soundcheck. I'll be playing something and something goes off in my head, 'Hey, this is a good one. Record that.' And I won't really do anything with it right now. But what I do, by the time we're done with a two-year tour or whatever, I'll have 50 or 60 of those little nuggets. And then I go sift through those and build around them. You have little moments.

"I've heard a lot of other musicians say this, or a lot of other artists of all sorts of genres, and I feel this way myself, and I don't think it's exclusive to us — I think we're all like this; I think we're all antennas for ideas and for things to come to you, as long as you're open enough to receive the message," he continued. "I've always felt that there's stuff floating around out there, and every once in a while, you're just in the right space for that frequency to get the idea. And I've always felt that a lot of my stuff kind of comes to me that way. It just comes to me out of the blue, and, like, 'Okay. I've gotta get that down.'"

Cantrell recently said that ALICE IN CHAINS will take time off from the road after the completion of the band's summer tour with KORN.

ALICE IN CHAINS' co-headlining tour with KORN kicked off on July 18 in Del Valle, Texas at Austin360 Amphitheatre and is making stops in Dallas, Nashville, Toronto, Denver and more before wrapping September 4 in Mountain View, California at Shoreline Amphitheatre.

ALICE IN CHAINS' first new studio effort in five years, 2018's "Rainier Fog" marked a few other firsts for the band: it was the group's first album for BMG and its first time recording in their hometown of Seattle in more than 20 years.