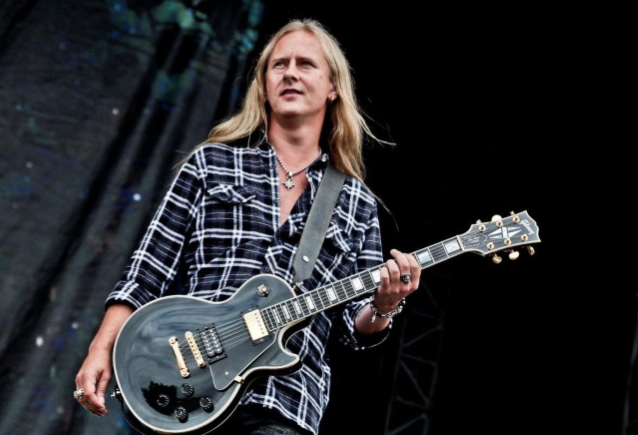 JERRY CANTRELL: 'Touring Is Getting On A Pirate Ship And Not Coming Back For A Year And A Half'

During a recent appearance on "Whiplash", the KLOS radio show hosted by Full Metal Jackie, ALICE IN CHAINS guitarist/vocalist Jerry Cantrell spoke about what it's like to sometimes spend several months on the road performing his music to fans all over the world. He said (as transcribed by BLABBERMOUTH.NET): "Touring is getting on a pirate ship and not coming back for a year and a half. It's all an adventure. It's a group of people bonding together and taking off to go all around the globe and play shows for people. It's a very physical process, touring and playing and being a musican. There's a lot of challenges to it. My favorite thing is just the fact that I get to see the world. I'm an army brat — my dad was in the army — and we moved around quite a bit when I was really young. And it feels kind of comfortable for me. I kind of got that traveling bug early 'cause I was kind of forced to get used to it. But that's one of the coolest things — is getting to go to countries that you've never been. On this last particular run that [ALICE IN CHAINS] did, with 'Rainier Fog', we like to check off a few boxes of a few countries we've never been to. We played Auckland, New Zealand for the first time. We played Tel Aviv [Israel], Saint Petersburg, Moscow [Russia] and Athens, Greece. were places that ALICE had never played before. So we try to fit that into the schedule — when we're thinking about doing a tour, [we make an effort to take] the band to some places we've never been."

Cantrell's new solo album, "Brighten", was released on October 29. The LP was co-produced by Jerry over the past year with film composer Tyler Bates and Cantrell's longtime engineer Paul Figueroa. They welcomed a dynamic cast of supporting players, including drummers Gil Sharone and Abe Laboriel, Jr. (Paul McCartney),pedal steel master Michael Rozon, Vincent Jones on piano, Wurlitzer, and organ. Other rock legends added to the fun of this LP, including Duff McKagan (GUNS N' ROSES) on select bass tracks, Greg Puciato (THE DILLINGER ESCAPE PLAN) handling all of the background vocals and Joe Barresi (TOOL, QUEENS OF THE STONE AGE) overseeing the mixing of "Brighten". Together, they recorded eight originals and the LP closes with an approved-by-Elton John cover of his classic "Goodbye" as the finale.

Jerry recently announced a U.S. tour that will bring him to cities such as New York, LA, Chicago, Boston, Nashville and Vegas, among many other cities.