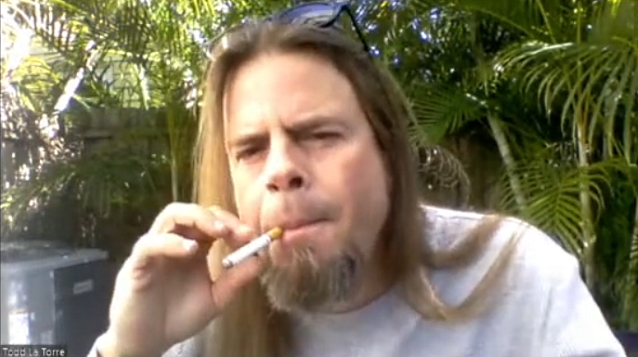 QUEENSRŸCHE singer Todd La Torre says that he doesn't care if people know that he is a longtime cigarette smoker.

The 47-year-old musician, who lives in St. Petersburg, Florida, discussed his smoking habit in a live video interview this past weekend with Canada's The Metal Voice. Addressing criticism from viewers of the livestream who objected to the fact that he was puffing away during the chat, saying that singers should abstain from cigarette smoking, Todd said: "I don't care. Whatever. I bet you there's a lot of really good singers that smoke. And some people hide it, and some people don't."

He continued: "For years, I never wanted anyone to see me smoking 'cause I knew if you have a bad show — never mind that you'd flown 25 thousand miles that month — they would be, like, 'Oh, that's why. He's gonna ruin his voice.' And then you sing killer. And you could say, 'Yeah, I don't smoke anymore.' [And then they'd say] 'That's why you sounded so good.' Everyone's an expert. I don't care."

Philip Anselmo (PANTERA),Corey Taylor (SLIPKNOT) and Udo Dirkschneider (ACCEPT) are among the other hard rock and heavy metal singers who have admitted to smoking cigarettes in the past.

QUEENSRŸCHE recently pulled out of SCORPIONS' rescheduled "Sin City Nights" Las Vegas residency in order to support JUDAS PRIEST on the "50 Heavy Metal Years" North American tour dates in March-April 2022. The tour will kick off on March 4 in Peoria, Illinois and conclude on April 13 in Hamilton, Ontario, Canada.