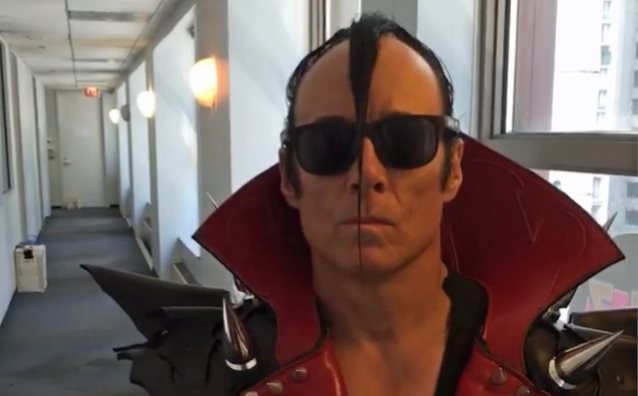 JERRY ONLY On MISFITS Reunion Shows: 'It's Gonna Be Us At The Top Of Our Game'

Speaking to Chicago's classic rock station 97.9 The Loop, Only stated about MISFITS' setlist for the upcoming concerts (see video below): "The first reunion shows are going to be all classic material. We've already picked the set. I let Glenn write the set. It's his baby. It's a really good set. We've got about twenty-two songs that we're definitely [gonna do], and we're probably gonna shoot for about thirty that we know before we we [walk out on stage]."

He continued: "When I'm fronting the band, we do up to forty or fifty [songs]. On our twenty-fifth anniversary, we played Roseland [in New York City], [and] we did fifty-something songs, and then we went down to the WWE World on Broadway for an after-party and almost hit a hundred songs in one night."

Only also talked about the possibility of the MISFITS reunion continuing beyond the Riot Fest shows. He said: "If [these two festival appearances] run well, and we find that we are hitting the potential…

"You see, the thing is, with us, we're a legendary act, we need to live up to what people conceive us to be. And the beauty of it is Glenn's in great shape, my brother looks like freakin' Hercules. And I've dropped about twenty pounds. I'm running every day, playing basketball with my nephews, trying to get that kind of mobility going. And then I rehearse the set about three times a night. We've got it on CD. We just got back from L.A. and we recorded the set. So I put it in and we put it through the P.A. and we rehearse to it. So it's like one hour of cardio, really."

He added: "It's gonna be us at the top of our game. And if we can live up to, and exceed, what people believed us to be, we're gonna try and keep going."

As previously reported, Glenn, Jerry and Doyle are rumored to have recruited Dave Lombardo (SLAYER, SUICIDAL TENDENCIES) to play drums for the band for the Riot Fest shows.

All your Misfits questions answered!