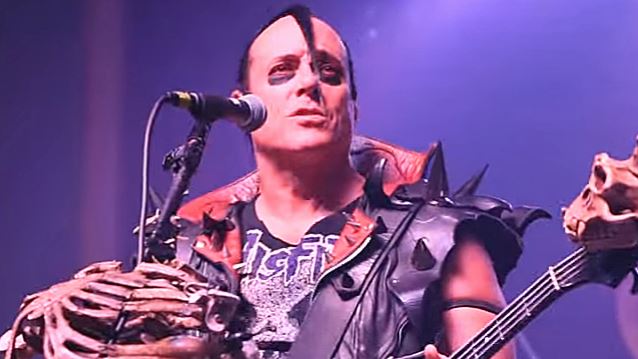 JERRY ONLY Talks GLENN DANZIG's Return To MISFITS: 'We Were Never Not Friends'

MISFITS bassist Jerry Only spoke to Rolling Stone about the band's reunion with vocalist Glenn Danzig and guitarist Doyle for an appearance at this year's Riot Fest, which will take place in Denver and Chicago this fall.

"We were never not friends," Only said. "We were just adversaries. Larry Bird might not have liked Michael Jordan on the court, but when they go out to a bar they're cool."

According to Only, the reunion came about after a meeting he had with Danzig in January. The pair had gotten together with the MISFITS management in order to discuss the rights to the band's name and merchandising with a view towards avoiding any further litigation between the parties. "We went in there wanting to cut each other's throats," Only said. "It was turning into another court battle and it turned into a reunion. We walked out the door knowing we were going to play together. It's a very cool thing."

Jerry, who had said in 2014 that he would consider reuniting MISFITS' original lineup on condition that Danzig left all "that dark, that real black stuff" "at home" and focused on being a "positive influence" to MISFITS' fans, was full of praise for Glenn in the Rolling Stone interview. He said: "The man has vision. Where we go from here, let's make sure we get along first. 'Cause we're doing well both on our own. If we do it and it don't work, fuck it — we did it, man. But that's not the case… I think we're going to get out there and back it up. And we're going to be the best band ever. That's my guess. It's going to be fun."

Only also talked about a possible setlist for the upcoming shows, explaining: "I wouldn't have done it unless I thought Glenn was really about it. I said, 'Look, I know every song, so you pick the songs and you pick the set. That way you got the best shot of giving your best show.' And we sat down and that happened pretty quick. We went through all the songs. We got 'Halloween', 'Die Die My Darling', no doubt, 'Last Caress', boom boom boom. We picked out the songs and we came up with about 30 songs. We're still messing around with the order."

The MISFITS reunion, billed as "The Original Misfits," will take place over two shows in September. The first concert is scheduled for September 2-4 at Denver's Riot Fest And Rodeo, while the second will happen at Riot Fest And Carnival, set for September 16-18 in Chicago.