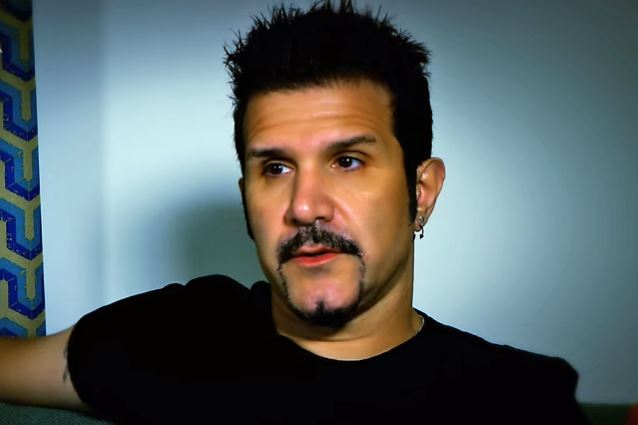 CHARLIE BENANTE Looks Back On ANTHRAX's 'Bad-Momentum Period' In '90s

ANTHRAX drummer Charlie Benante was interviewed by rock journalist Mitch Lafon for a recent edition of the "One On One With Mitch Lafon" podcast (Facebook page). You can now listen to the chat using the Spreaker widget below. A couple of excerpts follow (transcribed by BLABBERMOUTH.NET).

On whether there are any moments in ANTHRAX's history where he thinks, "Wow, we were just too stupid for our own good on this one":

Benante: "I think sometimes I look back at things and… People always will say, 'I have no regrets,' but yet I think deep down you regret this or you regret that. I don't have many regrets. I just wish that at the time maybe we weren't so arrogant about things or even ignorant about certain things. Maybe if there were people around being more, 'No, no, no. Don't do that,' and not just, 'Yes. Okay, let them do whatever they want,' maybe things would have changed here and there. I mean, there was that period in the '90s that it was just… it wasn't good, but I don't think we could have prevented what was happening. I mean, heavy metal was just a bad name, and I think we all had to just kind of ride it through. It's like a cycle; we just had to ride it through. And getting Joey [Belladonna, vocals] back in the band was the thing that… I mean, long story short, at METALLICA's induction into the [Rock And Roll] Hall Of Fame, afterwards we went out, and myself, Scott [Ian, ANTHRAX guitarist] and Lars [Ulrich, METALLICA drummer] were talking at the bar, and Lars just came out with the 'Big Four' [tour idea]: 'What do you guys think about that?' And we were, like, 'Fuck! That would be great, of course.' And we talked further about it, and then Scott and I, later on, just looked at each other, like, 'We've gotta get our shit together.' And that's what we did — we got our shit together."

On whether he regrets having made any of the ANTHRAX albums in the '90s, such as "Sound Of White Noise", during heavy metal's "down" period:

Benante: "No, no, no. I don't regret that at all. I love that record. There were reasons why things went the way they did, of course, and I can't put the blame all on the band. I have to blame the situation that we were in. We had signed to Elektra Records, and we put out a record that did very well — like extremely well. And the label that signed us was being [restructured]. Everyone who worked that record, 'Sound Of White Noise', was now being fired. A new regime was coming in. They didn't want nothing to do with us. They didn't sign us. So we lost everybody who was in our camp there. So we went into making this record called 'Stomp 442', basically, with no guidance, no nothing. We didn't know it at the time, but they weren't gonna work that record; they were just gonna let it go. And that was it. We were off Elektra Records after making two records. So that was the start of what I would call the bad-momentum period."