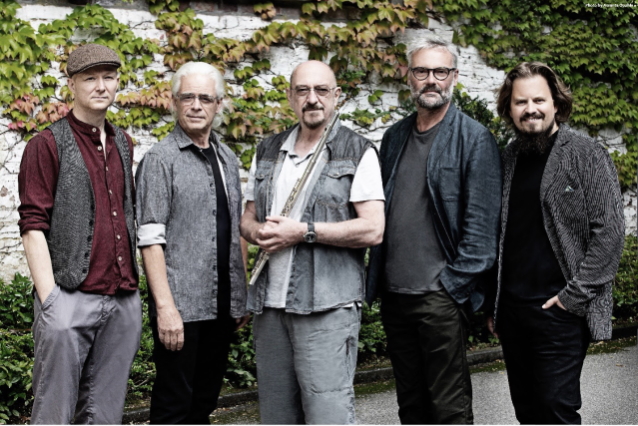 JETHRO TULL Launches Music Video For 'Mine Is The Mountain'

Earlier this year, British progressive rock luminaries JETHRO TULL released "The Zealot Gene", their first new studio album in over 18 years. Garnering critical acclaim, as well as the band's first U.K. Top 10 album since the 1970s, it also saw the band entering high in the charts in Germany, Finland, Switzerland, Austria and more.

With the band now back out on the road in Europe, they recently added the fan-favorite new track "Mine Is The Mountain" to their live set. To celebrate, a new video for the track has been commissioned, created by Tom Hicks who previously did the clip for "Shoshana Sleeping".

Of the track, TULL bandleader Ian Anderson comments: "'Mine Is The Mountain' is, perhaps, a late-life partner to the 'Aqualung' album song 'My God'. I had, as usual, a strong visual reference at the core of the lyrics. A miserable, committed trudge up Mount Sinai by Moses to face an angry maker before he must deliver the goods to his followers below is a powerful image, best imagined unless you are a wilderness trekker and much younger than I."

A record that began to take shape as early as 2017, "The Zealot Gene", in many ways, seeks to defy convention during a time when the business of being a touring and recording artist has never faced more uncertainties. Anderson holds no reservations about the role for which the mythos and themes of Biblical storytelling played in the lyrical content of the new album, saying: "While I have a spot of genuine fondness for the pomp and fairytale story-telling of the Holy Book, I still feel the need to question and draw sometimes unholy parallels from the text. The good, the bad, and the downright ugly rear their heads throughout, but are punctuated with elements of love, respect, and tenderness."

Looking back on the earth-shaking disruption of the coronavirus pandemic, which ultimately ended the band's touring plans and hopes of a 2020 release for "The Zealot Gene", Anderson said, "It was so sudden. Amidst the concerns and warnings of the scientific community and a few more enlightened politicians, we all retreated in disbelief to our homes to wait out the storm."

With more than 30 albums to their credit and sales totaling more than 50 million, JETHRO TULL is one of the most successful rock bands of all time with a catalog that contains classics that still resonate today. Led by Anderson, TULL still continues to tour throughout the world, entertaining audiences of all ages.