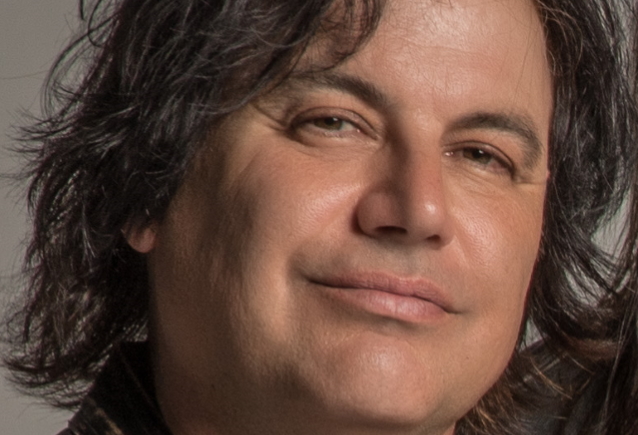 "I played with them back in 2014; when they neeed a [fill-in] drummer, I did three shows with them," Jimmy said. "And then they sort of went silent, and then all the legal stuff started to happen. And then we all started to talk again. So we decided to come out and play. And, of course, we started on the Monsters Of Rock cruise [in October 2016], which was really cool. And the show, I thought, went really well. We rehearsed three or four days. And then we started to book shows, and then we started to play.

"The odd thing about those guys, it's, like, there's no fighting — there was no fisticuffs in the dressing room or no screaming or any of that stuff. I don't know what goes on behind the scenes with Warren and Stephen and Juan. So we did [shows] pretty much through the end of the summer [of 2017], and then Stephen had to have his knee replaced, which, obviously, is traumatic. And then we started to talk again, and then the next thing I hear, Warren's not in the band. [Laughs] I'm, like, 'Oh, okay.'

"Honestly, I think you needWarren in that band. There's no disrespect to anybody, but the band is Warren and Stephen, really, for the most part, I think. I think most fans would agree. And I don't know what legal squabbles are going on behind the scenes. I'm not sure. I don't know if there's even any. I guess it's just a situation where they just can't coexist. I don't know."

Asked if Pearcy and Croucier approached him to play with RATT in the band's current lineup, which also includes guitarist Jordan Ziff, DeGrasso said: "Yeah, they did, for sure, and we talked a bit. My issue with it is, and, like I said, I made it clear with them, I just think the band's strongest when it's the three of them and [guitarist] Carlos [Cavazo, who played on RATT's last studio album, 2010's 'Infestation']. I mean, Carlos is an amazing guitar player, and it was a great chemistry there. It's all public domain. You can go watch the shows from '17 — they were great. I don't know why they can't keep themselves together. I don't know the subpolitics. And I told them that. I just [didn't] think I [wanted to] be involved unless it's the real guys."

In addition to RATT, DeGrasso previously played with Y&T, WHITE LION and MEGADETH, among others.

When RATT announced its 2018 relaunch, Pearcy said in a statement that the band has "not had an all-original member lineup since 1991 and sadly with the passing of Robbin Crosby, that chapter is over. However, if you still want to see the original band, there are many videos on YouTube and other places to enjoy. That was a fucking great band, but I guarantee that the new breed of RATT that we put onstage every night will be in your face, energized and fully engaged. Simply put, the band our fans deserve."

Guitarist Chris Sanders quit RATT earlier this year, explaining in a statement that he was retiring from the music industry.