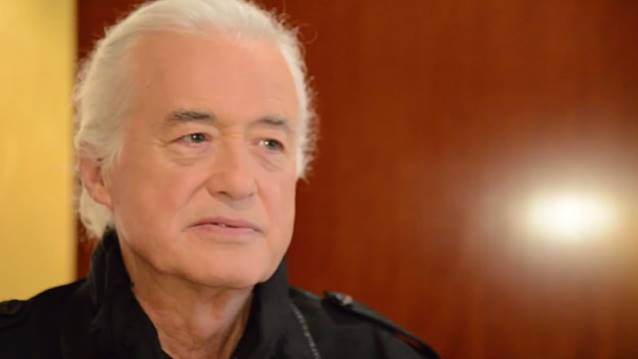 JIMMY PAGE On Possibility Of More LED ZEPPELIN Shows: 'You Can't Really Do It Without ROBERT'

France's Telerama.fr recently conducted an interview with legendary LED ZEPPELIN guitarist Jimmy Page. You can now watch the chat below.

Speaking about LED ZEPPELIN's lone reunion show at London's O2 Arena, Page said: "The 10th of December, 2007. The O2 show in London with the three remaining members of LED ZEPPELIN and [drummer] Jason Bonham, John's [late LED ZEPPELIN drummer] son, where we did one concert. And it was a very emotional concert for the people there. We took it very, very seriously, put lots of work into it — well, John Paul Jones [bass] and myself did with Jason, so that you really felt part of the band.

"We all had reputations, and we had a collective reputation for LED ZEPPELIN. [But] Jason Bonham had the hardest job that night, because he had to step into his father's shoes. I know that the amount of work that we put into it gave him the extra confidence to be able to do that, so that was really good."

He added: "It was a wonderful show… And I'm really pleased that, finally, it managed to come out as a DVD, 'Celebration Day', 'cause then people could sort of witness how good it was."

Asked if LED ZEPPELIN will play any more reunion concerts in the future, Page said: "You can't really do it without [singer] Robert [Plant]. So you can't really do it. The key to this is that [was] 2007, it's now 2014. I mean, if he wanted to do it, with his other bandmates — I mean, singing LED ZEPPELIN with his other bandmates — then he could do it. But he doesn't choose to, so I can't speak for him."

As previously reported, Plant mocked Page's recent remarks regarding Plant's on-again, off-again interest in a LED ZEPPELIN reunion. Last month, Page, who is promoting the deluxe reissues of the first three ZEPPELIN albums, finally came out and blamed Plant for being the bandmember thwarting any hopes of a ZEPPELIN reunion tour. During a lengthy interview with The New York Times, Page said, "I was told last year that Robert Plant said he is doing nothing in 2014, and what do the other two guys think? Well, he knows what the other guys think. Everyone would love to play more concerts for the band. He's just playing games, and I'm fed up with it, to be honest with you. I don't sing, so I can't do much about it. It just looks so unlikely, doesn't it?"

During Plant's recent press conference in Morocco to publicize his side band, the SENSATIONAL SPACE SHIFTERS' shows, Plant addressed Page's comments, saying, "He needs to go to sleep and have a good rest, and think again. We have a great history together and like all brothers we have these moments where we don't speak on the same page, but that's life."