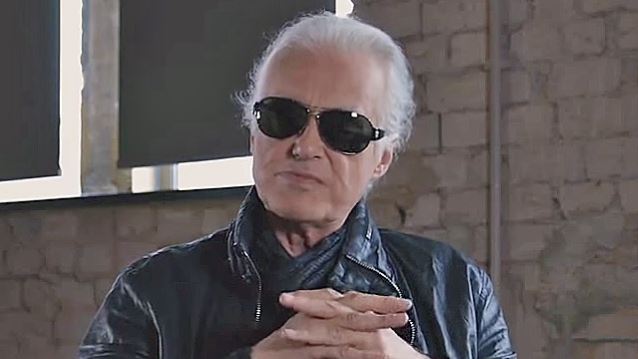 LED ZEPPELIN guitarist Jimmy Page recently talked to NME about wrapping up the band's new reissues series. He also took NME through some of the intentions and the painstaking process of the reissues he spent two years compiling. Check out the clip below.

Coming on July 31 are deluxe editions of LED ZEPPELIN's final three albums: 1976's "Presence", 1979's "In Through The Out Door" and 1982's "Coda". The reissue program has been curated by Page, with each album featuring at least a second disc of companion audio comprised entirely of unreleased music related to that album. The single CD set features the remastered original albums. "Presence" and "Coda" will be packaged in a gatefold card wallet. All CD and LP versions of "In Through The Out Door" will be wrapped in a brown paper page replicating its initial release. The Deluxe Edition (two and three CD) features the remastered album, plus a second disc of unreleased companion audio. "Coda" will feature two companion audio discs.

Page explained to The Pulse Of Radio that when pressing the ZEPPELIN albums into LP records back in the day, as the process went on, sound quality was compromised the further the music got from the original tapes — a situation that has been rectified by modern technology. "What happens is, with these albums (is) that you find that the first test pressings are pretty good, but once they get them on the production line, then the quality, sort of, it starts to disappear a bit — or lack," he said. "With all of the advance of technology, that has sort of, preceded the point that we can… that I can revisit the albums and re-cut them; then it gave the opportunity to give the best possible quality at this point. And really, actually — by hi-fi standards, this in, like reviews in hi-fi magazines — [they say] they're better than what the original ones were; which of course, that's always the object of the exercise."

The Single Vinyl LP is remastered album on 180-gram vinyl, packaged in a sleeve that replicates the LP's first pressing in exacting detail. All vinyl versions of "In Through The Out Door" will also include the water-sensitive insert that replicates the inner sleeve from the album's initial release.

The Digital Download includes the remastered album and companion audio will both be available.

* Remastered album on CD in vinyl replica sleeve.
* Companion audio on CD in card wallet.
* Remastered album on 180-gram vinyl in a sleeve replicating first pressing.
* Companion audio on 180-gram vinyl.
* High-def audio download card of all content at 96kHz/24 bit.
* Hard-bound, 72-plus-page book filled with rare and previously unseen photos and memorabilia.
* High-quality print of the original album cover, the first 30,000 of which will be individually numbered.

The bonus tracks for the LED ZEPPELIN reissues are:

"In Through The Out Door"

The press release for the latest set of LED ZEPPELIN reissues came with some notes regarding the expanded version of "Coda":

"Coda" will be the only LED ZEPPELIN deluxe edition to include two companion discs, featuring 15 tracks recorded between 1968 and 1974. The oldest song in the collection is also perhaps the most interesting. The frenetic blues jam "Sugar Mama" was recorded in 1968 at Olympic Studios during sessions for the band's eponymous debut. The song was completed but never officially released until now. "Baby Come On Home" from the same session is also included in the set.

Also included is the previously unreleased "St. Tristan's Sword", a rollicking instrumental recorded during the "Led Zeppelin III" sessions in 1970.

In 1972, Robert Plant and Jimmy Page took a fabled trip to India to perform with the Bombay Orchestra and now, for the first time, recordings from these sessions will be officially released with dynamic takes on "Friends" and "Four Hands" ("Four Sticks" from "Led Zeppelin IV").

Among the many other highlights featured here is an early version of "When The Levee Breaks" from 1970 titled "If It Keeps On Raining"; rough mixes of "The Wanton Song" and "In The Light", from the "Physical Graffiti" sessions at Headley Grange, the latter a different alternate version than the one included in the "Physical Graffiti" deluxe edition; and an instrumental mix of "Poor Tom" from 1970.