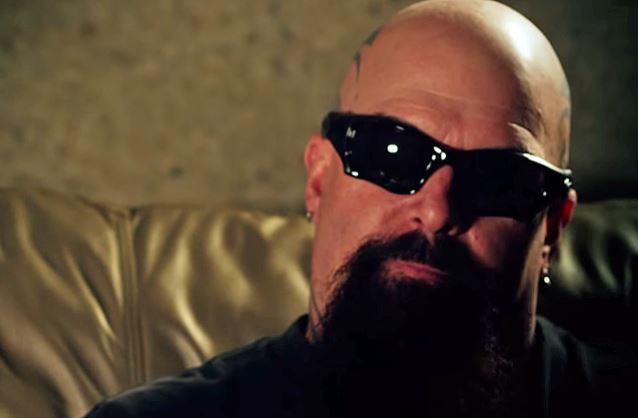 SLAYER's KERRY KING: Getting Drummer PAUL BOSTAPH Back Was 'The Right Choice'

A four-minute video clip in which the members of SLAYER discuss the return of drummer Paul Bostaph can be seen below.

Bostaph rejoined SLAYER in 2013 after previously leaving the group twice. "If he hadn't quit the band, he'd still be in the band," SLAYER bassist/vocalist Tom Araya said. Guitarist Kerry King added: "Nobody ever had a problem with Paul. And I still don't know if I know the reasons why he left the first two times."

Continued Araya: "I don't think there's really any other drummer that can replace anybody like Paul can. So when he came in… I mean, when he first joined the group, we sat with him for about, almost two years just going over SLAYER material, so he could get a groove and a vibe for the songs that we hadn't played, that we'd written. And then in that process, that's when we started working on 'Divine Intervention'."

Original SLAYER drummer Lombardo was effectively fired from the band after sitting out the group's Australian tour in February/March 2013 due to a contract dispute with the other members of the group. King blamed the split on "misinformation — not coming from SLAYER." He told Artisan News: "I feel bad for Dave, because he made some really bad choices based on listening to some really bad advice."

Araya said: "When things were going on [with Dave two and a half years ago], we had a little roundabout, between the three of us [Kerry, Tom and guitarist Jeff Hanneman], and I told them, 'I really think we should have Paul back in. 'Cause it's not somebody new. It's not someone that we have to work with. It's someone that sat in the band."

Added King: "We pursued it. We got back from Australia. I did demos with [former SLAYER drummer] Jon Dette, I did demos with Paul — the same two songs, under the same circumstances; they each had, like, 24 to 36 hours to learn 'em — and just see where it went. And Tom and Jeff both decided Paul, and in hindsight, that was the right choice."

Concluded Araya: "I'm glad [Paul is] back now. Because it makes life easy for everybody — as opposed to having to try to work with someone that we'd never worked with. He's a familiar face. Everybody knows Paul. And Paul was a member [before]."

SLAYER's new album, "Repentless", will be released on September 11 via Nuclear Blast. The CD's title track is now on sale digitally virtually everywhere, including on Amazon, iTunes and Google. The artwork was created by Brazilian artist Marcelo Vasco in collaboration with the band's Tom Araya and Kerry King.