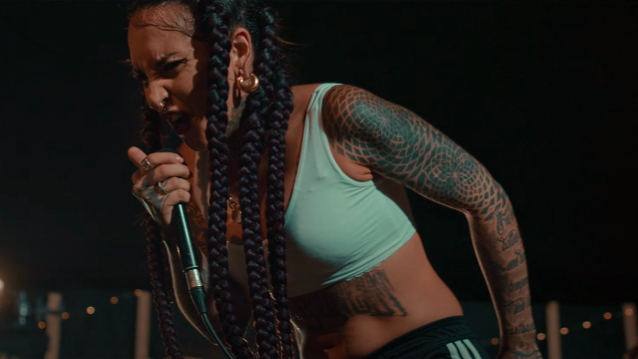 Ukrainian modern metal metallers JINJER have released the official music video for the song "The Prophecy". The track is taken from the band's latest album, "Macro", which was released in October 2019 via Napalm Records.

JINJER bassist Eugene Abdukhanov comments: "When we wrote 'The Prophecy' in 2019, little did we know that it would prophesize things to come in 2020 ... the entire screwed up, scary and confusing year all wrapped up in our brand new single. That being said — we are not only very excited for this new video, but to also announce that we will release videos for all tracks from our 'Macro' album. It's the very least we can do in these strange times!"

As previously reported, JINJER will release the audio recordings from one of the last metal shows played on the planet before the global COVID-19 lockdown: their ferocious sold-out Melbourne, Australia performance on March 5, 2020. The live album "Alive In Melbourne" features stunning artwork by gifted JINJER fan Gabriel Nicoletti, includes 17 tracks in total and will be made available on November 20 via Napalm Records.

Abdukhanov told Billboard: "Everything comes naturally. We are not looking at each other and discussing, 'Let's make it as diverse as we want.' We let the flow go, and it just brings us somewhere."