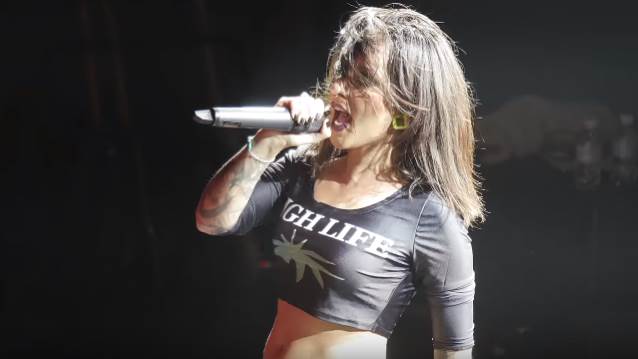 JINJER bassist Eugene Abdiukhanov has confirmed to France's Loud TV that the band will enter the studio in the fall to begin recording new music.

"This [last] time, we were in America, we played a tour with CRADLE OF FILTH, and our plan was to come [back home] to Ukraine in the autumn and make the full-length album, because we would have the whole season, three months, at home," he said. "But at the end of the American tour, Dez Fafara from DEVILDRIVER, our manager, calls me and says, 'Okay, Eugene, you have to come back in the autumn.' And I said, 'Dez, but we were planning to make an album.' And he said, 'No, it's more important for you to come here and play, because you have to make a foundation for the band. Everything is going very, very well, so you have to come back.' And he persuaded me and all the others about that."

He continued: "Our argument was that we can come back, but at the same time, we cannot, because we need to make new songs. Personally, we cannot play anymore the same songs on stage; we just need to make something new. And we agreed that we will make an EP; so we're gonna record an EP — four or five songs, absolutely brand new. It will be a different direction, it will be a different approach, but still JINJER. It's gonna be progressive."

JINJER's third album, "King Of Everything", was released in July 2016 via Napalm Records.

The band's second studio LP, "Cloud Factory" — which originally came out in 2014 — was reissued earlier this year with two live tracks.