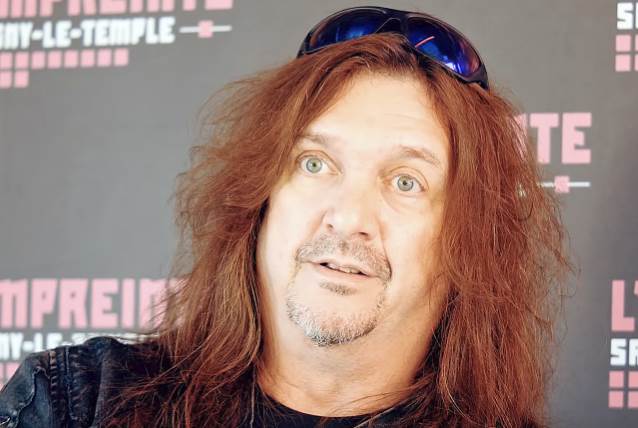 SKID ROW Guitarist: 'I'm Just Happy That We're Still Able To Do This'

SKID ROW bassist Rachel Bolan and guitarist Dave "Snake" Sabo were interviewed by Duke TV on May 23 at Empreinte in Savigny-le-Temple, France. You can now watch the chat below. A couple of excerpts follow (transcribed by BLABBERMOUTH.NET).

On collaborating with outside songwriters — including Corey Taylor (SLIPKNOT, STONE SOUR) and HALESTORM's Lzzy Hale and Joe Hottinger — on the upcoming final installment of SKID ROW's "United World Rebellion" trilogy:

Rachel: "It's not like we're writing the whole record with outside writers. Obviously, we have a lot of friends that we respect as songwriters, and we wrote with a few of 'em. Whether they end up on the record or not, we don't know, but we feel pretty strong about the songs. But we haven't all gotten in a room, really, and rehearsed 'em. It was a fun process, because [Snake and I] have been writing together for over 30 years, and this is the first time that we actually kind of went outside of our comfort zone, and doing it with friends just made it a little more comfortable. So we're pretty happy with the tunes we have so far, and [new SKID ROW singer] ZP [Theart] definitely contributes, and I'm sure he'll continue to contribute even more."

Sabo: "Really, the main reason why we did was just to learn from other people too — to just get different perspectives and stuff. There's no pushing and pulling — it's just you're making music for the love of making music, not because you need to fulfill a quota or a deadline or anything like that. And it's not for the money — it's for the love of doing it. And that's the way it should be."

On SKID ROW's latest addition, South African-born, British-based vocalist ZP Theart, who was previously in DRAGONFORCE, TANK and I AM I:

Rachel: "ZP is 10 years younger than us; he grew up listening to SKID ROW. We were one of the first bands why he became a singer. When we had him in the States to try him out for the first time — I had known him for a few years before that — but he came in and he's, like, 'I've known these songs my whole life. This is easy.' [Laughs]

"He's really good with coming up with melodies over music. He comes up with it quick, which is really cool; he hears something and he goes with it. We're very excited, because we're in a situation that we've really never been in before."

On SKID ROW's accomplishments over the course of the band's 30-year career:

Rachel: "We were the first heavy metal band [or] hard rock band to debut at No. 1 on [the] Billboard [ album chart], and we'll always be, which is pretty amazing. We've headlined a festival [in Poland] over the past couple of years in front of 600,000 people; that was amazing. I feel like I would be pompous if I said we fit in between these bands over here in the history of rock and roll, because it's just so weird to even say that. I know we have a SKID ROW history. Just to see us up in the same book as some of our favorite bands, I can't even get my head around that."

Sabo: "I think that's for everybody else to decide. I'm just happy that we're still able to do this and do it in a way that we're doing it, on our own terms and stuff. Look, it's kind of like reading the comments section on Blabbermouth — everybody's gonna have a shitty opinion and a great opinion. You know what? At the end of the day, we get to go up on that stage and play, and hopefully every night we walk off and we're happy with the job that we did, and if we're not, we'll make sure that the next night we're better than we were."

SKID ROW's new album — which, unlike the first two chapters of the "United World Rebellion" trilogy, will be a full-length recording — will see the band reunited with famed rock/metal producer Michael Wagener, who worked on SKID ROW's first two albums, 1989's "Skid Row" and 1991's "Slave To The Grind", as well as 2006's "Revolutions Per Minute".