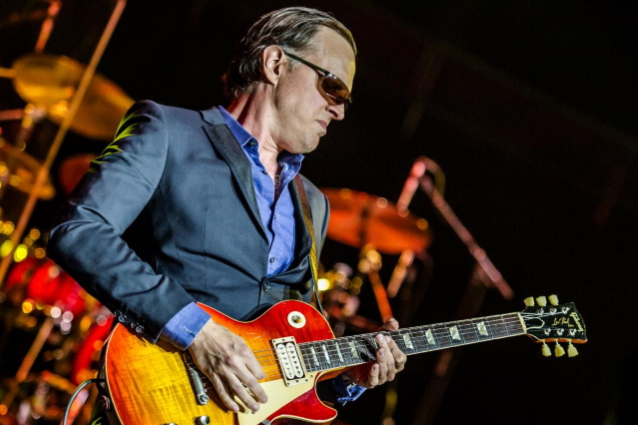 Two-time-Grammy-nominated blues-rock sensation Joe Bonamassa has announced U.S. tour dates for summer 2020, as he heads out on the road for his extensive spring U.S. tour. The newly announced dates will include performances at the coveted Greek Theatre in Los Angeles, two nights at the legendary Red Rocks Amphitheatre in Colorado, and a selection of other major venues in California and Utah.

Hailed internationally as one of the greatest guitar players of his generation, Bonamassa has almost single-handedly redefined the blues-rock genre and brought it into the mainstream. Recently featured on the cover of Guitar World, the magazine has boasted him as "the world's biggest blues guitarist," and fans of the popular site agreed, in a 2019 year-end poll naming him the No. 1 best blues guitarist.

Tickets for the newly announced dates go to special fan club pre-sale on February 25 and are on sale to the public February 28 at 10 a.m. local time via jbonamassa.com/tour-dates.

Bonamassa is one of today's top live performers and his enthusiastic shows are one of the biggest parts of his career, and a favorite for music lovers worldwide. The 2020 summer shows will feature a signature selection from his vast track record of No. 1 albums, with classics, reinventions and more, backed by a stellar band of legendary musicians including "Late Night With David Letterman"'s Anton Fig (drums),Rock And Roll Hall Of Famer and member of STEVIE RAY VAUGHAN AND DOUBLE TROUBLEReese Wynans (piano/organ),Nashville recording legend and Musician's Hall Of Famer Michael Rhodes (bass),Paulie Cerra (saxophone),Lee Thornburg (trumpet),and incredible backup singers.

This summer's performances at Red Rocks Amphitheatre mark the seventh consecutive year Bonamassa will be performing at the revered venue. To celebrate, he'll be pulling out all the stops and curating a special live engagement featuring the prestigious Colorado Symphony. The unique collaboration will delight fans new and old as Joe reimagines fan favorites from various parts of his catalogue, including new tracks from his upcoming studio album. Driven by the orchestral arrangements of some of the world's leading classical composers and Hollywood movie orchestrators, Bonamassa will give both acoustic and electric renditions of his essential tracks. This unforgettable performance will be exclusive to the majestic open-air amphitheater, to be filmed and recorded for a later release.

With his most recent album, "Live At The Sydney Opera House", Bonamassa achieved his 22nd No. 1 album on the Billboard Blues chart. For Bonamassa, the music never stops, and the hit records keep coming! With over 40 albums to his credit thus far, including studio and live recordings, collaborative albums with blues sensation Beth Hart, and creative offshoots BLACK COUNTRY COMMUNION and ROCK CANDY FUNK PARTY, the living legend somehow always finds ways to reinvent his artistry.

As part of his entrepreneurial and philanthropic endeavors, this summer he will embark on his second annual Mediterranean cruise, co-headlining with IAN ANDERSON PRESENTS JETHRO TULL, and featuring performances from Walter Trout, Marc Broussard, Samantha Fish, Ana Popovic and dozens more blues artists. In addition, Bonamassa has also hosted six sold-out Caribbean music festival cruises, raising funds and awareness for his music education non-profit, Keeping the Blues Alive Foundation. KTBA aims to conserve the art of music in schools by funding projects, scholarships, and grants that preserve music education for the next generation. Just announced this week, the seventh edition of the Keeping The Blues Alive At Sea festival is slated for March 8-12, 2021 sailing from Miami to Ocho Rios, Jamaica with a star-studded line-up.

Bonamassa also just finished his time in the iconic Abbey Road Studios in London, working on his next much-anticipated studio album, due out later this year. As an artist who spends nearly 200 days a year on the road and his spare time writing new songs, Bonamassa is always curating new ways to diversify his craft, hitting the stage with fervor, and bringing awe and amazement to crowds everywhere.

Catch your favorite guitarist as host of the weekly radio show "Different Shades Of Blue With Joe Bonamassa" on SiriusXM's Bluesville at 6 p.m. ET every Monday via SiriusXM channel 74. He explores all aspects of the blues music genre like never before and curates an eclectic mix of everything from historical gems to forgotten favorites and modern hits.