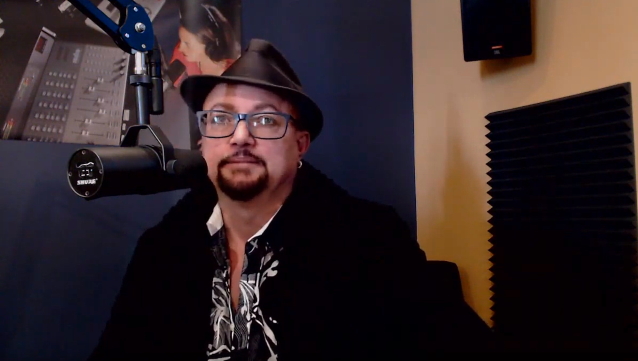 Geoff Tate says that the success of QUEENSRŸCHE's "Empire" album almost caused the band to break up.

In a new interview with iRock Radio, Tate was asked how the "Empire" LP's immense popularity "changed" the members of QUEENSRŸCHE.

"From our first EP, we started making a lot of money, and then gradually more and more and more, and then, by the time 'Empire' hit, of course, that was a whole different income level," he continued. "So now you had to actually spend time thinking about what you were gonna do with your money. Because before, you just put it in the bank, but now you had to think about, 'Is this the right bank?' And, 'Should I move it into these banks?' And, 'What's happening here?' Because none of us came from any kind of business background.

"It's funny enough, but when you have success like that and now you have all this money to deal with, there's a lot of people that are around that jump in and volunteer," Tate added. "So then you have to weed those people out. [Laughs] So now, you're dealing with all these things that you've never dealt with before, and you're not dealing with what you normally do, which is you write music. You're thinking in those terms, and now you're not thinking of that. So it took us probably three to four years before we actually got back together and made music again. So we really drifted apart. Some people were buying airplanes, and some people were buying real estate and dealing with all those things. So we really separated.

"I never got into music to be famous. I became famous — semi-famous — because of the music," he said. "So fame was never that important to me. And when we had the 'Empire' album, now we had people approaching us wanting to make action figure dolls. They said, 'This is the next level. This is what you have to do.' And for me, that was insulting. Remember, this was before the term 'rock star' was considered complimentary or before it was an energy drink that you can buy at a 7-11. A rock star, in my generation, was an insult — that was somebody that didn't have any musical talent; it was a faker — they were just in it for the cameras and the girls and that kind of thing. So I found the whole thing distasteful and didn't want anything to do with it. And other people in the band were going, 'You're crazy. This is what we've gotta do. I wanna be an action figure.' So, you see there was a split in the band at that point — those that wanted action figure dolls and those that didn't. [Laughs]"

Tate is currently performing the QUEENSRŸCHE albums "Empire" and "Rage For Order" in their entirety on the "Empire 30th Anniversary Tour", which kicked off last month in Norway.