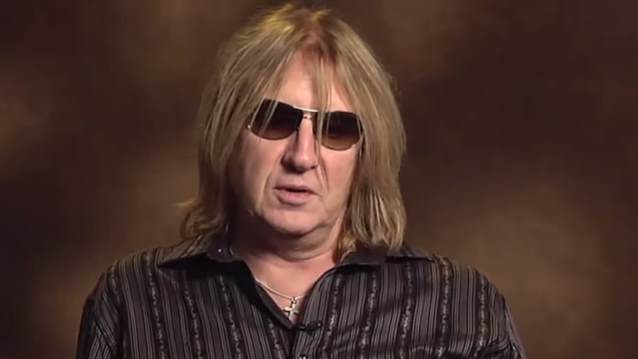 Mark Dean of Myglobalmind webzine recently conducted an interview with DEF LEPPARD singer Joe Elliott. A couple of excerpts from the chat follow below.

Myglobalmind: I read a recent interview with yourself in Classic Rock which indicated your general dissatisfaction with the current state of the music business as a whole. You stated with the release of the next DEF LEPPARD album, it will be as the band operating like a cottage industry?

Joe: Well, we have been a cottage industry for five years. As soon as we were out of our deal with Universal, we have done everything in-house — everything. We do our own artwork, our own distribution deals. We write and record our own songs, we record our own live stuff, we organized it all. Even Bludgeon Riffola is actually physically operating as a record label now; because of the DOWN 'N' OUTZ album was released on that. It's not that difficult to do; all you need to do is have a bit of knowledge. When you sign to a record label, you get assigned somebody to organize all your press for you. They are not necessarily any good, they just work for the label. Doing it this way we can pick and choose people that are really good at finding people like yourself to go to. People that are as equally as good as the record label, but they don't take a huge chunk of your money. They pay you a miserly little fee for delivering this record, because supposedly they have the infrastructure and promo and all that kind of stuff. If you actually just think about it, you can actually do it yourself. It's not hard, you get people to work for you. You pay them to do it, and paying them to do a good job is a lot less money than paying the record company to do it for the small amount of royalties that they will give you. We will try and bury as much of that as possible, so we have been operating as a cottage industry for the last five or six years. In that time, we have headlined Download twice. On the 35th anniversary of the band's existence, we played in front of 82,000 people in Quebec. It's not like we are suffering because of this. We are ticking along, and any mistakes that get made are ours. We don't like finger pointing and we hate getting angry at people and, "You have messed up our career." We are more than happy to mess our own career up. If it is going to go down the tubes, I want to be responsible for it, not somebody else. At least it is our choice, and that is what it should be. Artists should be in charge of their own career and that is all that we are doing. We are just wrestling back control.

Myglobalmind: What about that new DEF LEPPARD album, how is it shaping up?

Joe: Well, we got together in February to write what we thought would be a few songs and we ended up with twelve cooking in the pot. They are in various degrees of being finished. Three of them, we could actually release them tomorrow, if I am being honest. We won't, but we could. We had tinkered with the idea of an EP, but then when the music kept coming out, we went, "No, this is going to be an album." We are getting back together in two weeks time to do another few weeks work on it. Then we are taking a break to start rehearsals and production rehearsals for this big tour of America with KISS. So it is cooking along very nicely. I added some vocals on one of the tracks last night and will be doing some more this evening. I don't like to sing too early in the day. Again, like I said, it's the beauty of being in control. Most people go, "You cant do that." Well, yeah, I can, because it's my studio. I will do what I like [laughs], which is brilliant, you know. I mean, I have earned the right after thirty-odd years of doing it to own my own studio and dictate how it gets done. We are a team. All that means is when I do the vocals, it is not like some A&R man telling me that I have got to do this and that. They are by nature failed musicians mostly. Why would you take any notice of somebody that never had any success? How can they possibly judge when they don't know what it is? We trust each other a lot more than we trust the outside world, if you like. The guys will be here, and we shall write some more, beat our heads against each other and try to get this thing into the right shape. That's the only people that I really want to be hassled with is ourselves. We don't really fight, but we have different ideas, creativity-wise, as to how it should go, and that's really it.

Myglobalmind: How is it sounding? Raw and heavy like those early releases such as "High 'N' Dry" or more like the polish of releases like "Hysteria" and "Pyromania"?

Joe: It's a bit of everything, really. The one thing that LEPPARD will probably never ever do again is an album that sounds like "High 'N' Dry" all the way through. That was 1981. It was thirty two years ago. People have to get over it. It's gone. Robert Plant is never going to sing like he did on "Led Zeppelin I", because he doesn't want to. There will still be the odd song that you will hear it and go, "That could have been on 'High 'N' Dry' or 'Pyromania'." What we are really doing is trying not to sound like anything, just writing songs that we feel are good songs and not anchor them to some past glory. It's much more important that the songs are good, and it doesn't really matter if they have any reference to our back catalog or not. It is a rock and roll record, for sure.