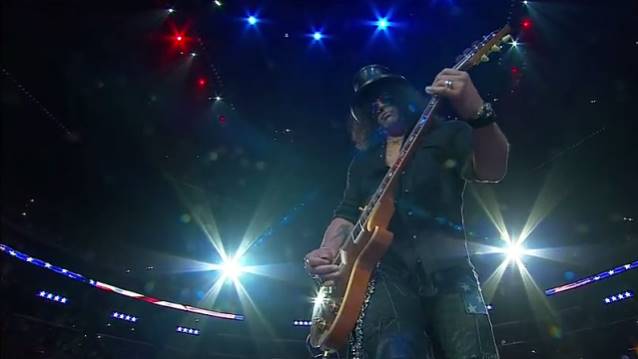 Former GUNS N' ROSES guitarist Slash performed America's national anthem at Game 3 of the Western Conference finals of the NHL hockey Stanley Cup playoffs on Saturday, May 24 in Los Angeles. Slash was joined by sergeant Corey Lamel of the U.S. Marine Corps for a rendition of "The Star-Spangled Banner" before the home team faced the Chicago Blackhawks. Video footage of the performance can be seen below.

Slash and his backing band, MYLES KENNEDY & THE CONSPIRATORS, have finished mxing the third album to be released under the Slash solo banner. A total of 17 songs, including one instrumental, were laid down for the follow-up to 2012's "Apocalyptic Love".

Slash recently with the U.K.'s Kerrang! magazine about his third solo album. He remarked, "All I can tell you is that it's a really fucking great record. I'm very proud of it, but I don't want to get into, 'Oh, dude, it's epic,' or 'It's the heaviest thing ever.' It's very rock and roll, and, as always, it's very diverse in feel, and I'm just super, super proud of everything that we collectively put into making the thing. It's just going to be a bitchin' record."

Slash added that he and his band have grown a lot together during the making of the new CD, saying, "The band has become so synergetic. I showed the music to the guys, and what they wrote flowed immediately. I was really amazed at how, from the second we started pre-production up 'till now, the record just flowed. It's rare that it happens like that."

The new album is tentatively due out in September. Slash released his first self-titled solo effort in 2010.

Slash and AEROSMITH will team up for a U.S. tour this summer.