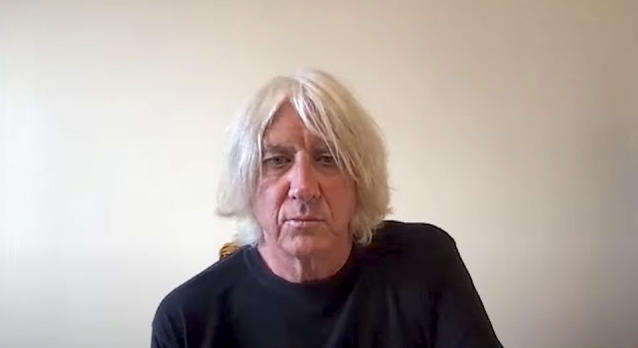 DEF LEPPARD singer Joe Elliott has confirmed to Download festival host Kylie Olsson that he and his bandmates have used the coronavirus downtime to work on new music. "We have written some songs — I can't deny that we have written some songs remotely as an exercise to see if we could, and I can announce it was very successful," he said (as transcribed by BLABBERMOUTH.NET). "What are we gonna do with those songs? That's to be seen. We've gotta wait and see, because, obviously, everybody's in different continents, in different cities and all that kind of stuff. So there's a lot of work to be done before we get to a finished product. But we have not let the year go to waste."

Addressing the fact that it's been nearly six years since DEF LEPPARD last released album, 2015's self-titled effort, Joe said: "The industry being what it is, we're all aware of the fact that there's an element of the media that can't let go of the fact that records aren't that important anymore. And I know that's a sad thing to say, but it's a fact of life. Touring is massively important — way more than it was when you went out promoting records when they were important. Especially for legacy bands or whatever you wanna call 'em. Listen, I went to see THE ROLLING STONES in 1989 in case one of them died. That's 1989. They haven't had a death since the 1960s.

"I'm aware of the fact that when you've got a history — whether it be THE EAGLES or FLEETWOOD MAC or any of the bands from the '80s, like us and [IRON] MAIDEN and whoever else, we've got this legacy audience as well that wanna see us continue the journey, if you like. And that's become way more important.

"When we finished that [2015] album, we never really thought about making another record until we just felt the timing was right," Elliott explained. "And we always just fall into place. We're constantly writing songs, so when it comes to piecing songs together, it's not like they're all absolutely brand spanking new, just written, hot-off-the-press stuff. Some of them are ideas that have been percolating for a year or two with a piece missing. And you wait and you wait and you wait, and then you have this epiphany, or one of the other guys goes, 'Why didn't you ask? I've got a bit that would fit in there perfect.' So there's been a lot of that going on. But that's a constant; that's nothing to do with coronavirus. We've been doing it since the 'Def Leppard' album came out, and we will continue to do it, whether we release an album or not. We've got songs in our heads."

DEF LEPPARD's "The Stadium Tour" with MÖTLEY CRÜE, POISON and JOAN JETT & THE BLACKHEARTS was recently officially postponed until 2022.

Prior to the latest postponement, "The Stadium Tour" was slated to kick off on June 19, 2021 in Nashville, Tennessee and conclude on September 12, 2021 in San Diego, California. The trek will now launch on June 16, 2022 in Atlanta, Georgia and run through September 7, 2022 in San Francisco, California.