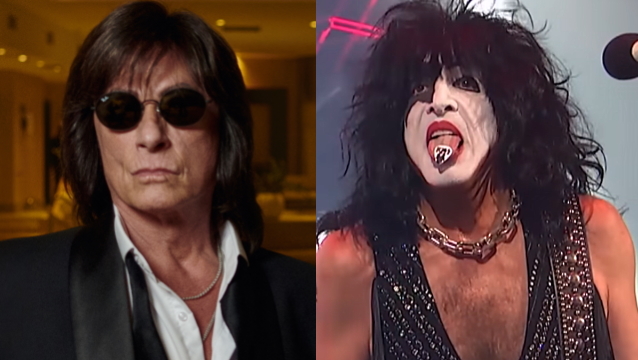 In a new interview with Andrew Daly of Metal Castle, legendary hard rock vocalist Joe Lynn Turner (RAINBOW, DEEP PURPLE, YNGWIE MALMSTEEN) was asked for his thoughts on his contemporaries using backing tracks in the live setting. He said: "I think it's become too much. I understand some groups need to rely on these computers, but I'm old school, and I think live music should be live. That's what people pay for. If you are well-known and you're going out there and using backing tracks, you're not being honest; it's pantomime. It's not even karaoke. I feel it's cheating people, and it's cheating yourself. Because if you can't cut it live, well, that's what separates the men from the boys. That's what separates who's great and who's average. Anyone can cover it up in the studio, but it all comes out live, and if you can't hack it, then get off the stage.

"I understand there's a technology that certain bands use today, but if you're KISS, for example, maybe you ought to quit while you're ahead, guys. Don't you think you've got enough money to where you don't need to take all the static for doing what you're doing? All it's doing is destroying your legacy, and you'd probably be better off if you just stopped. I'm not trying to point them out individually, but they've been known to use it.

"And look, I understand how difficult it is, especially for singers, because you can only go so many nights in a row. So, if you want to be out there still, maybe cut back the nights, and maybe you can't make as much money. I think we have to look at the driving force here and then try and understand the motivation for why they do it. If you're only doing it for money, so you can have five nights instead of three, that's not a good enough reason for me. Go play for three nights and be yourself. Or stop doing it altogether."

Last month, Sebastian Bach and Ronnie Radke engaged in a war of words on Twitter over FALLING IN REVERSE's decision to cancel a festival appearance due to "missing" laptops.

Just hours before FALLING IN REVERSE was supposed to appear at the WIIL Rock festival on September 24 at Lake County Fairgrounds in Grayslake, Illinois, the singer and his bandmates scrapped their performance because their laptops — which the musicians use to "run" their "show" — were lost. At the time, Radke said in a video message that he and his bandmates had "no other option" because "as a band in 2022, you need your laptops. It's like driving a car without an engine."

One person who seemingly defended Radke and FALLING IN REVERSE is MÖTLEY CRÜE's Nikki Sixx. The bassist wrote: "Keep beating that fake bullshit drum. Sounds so 'Get Off My Lawn'. God forbid if some artists use technology as a creative tool on albums and in live settings. I get it. Just open your mind and stop fighting reality. Makes you sound outta touch and I like that you fly the rock flag."

Bach previously said that he is "one of the last people" who are still not using pre-recorded tracks at their live shows. "I don't know how much longer I can say to you that I don't use tapes onstage, because I don't, and I never have," he told Consequence Of Sound. "And I still don't. When I have opening bands, and they're using tapes, and then I come out and I don't use tapes… sometimes, it makes me feel stupid, because I'm like, 'What am I doing, when all these kids half my age can come onstage and do all of my moves, but they don't have to warm up for an hour before the show, or weeks, before the first show?' Sometimes, I'm like, 'Why do I even bother, if the public is so used to this other way?' It's becoming very rare to come see a good band that's actually a real band — that's not miming or doing silly moves while a tape is running. It just becomes more rare as the years go on."

Sixx has been open about MÖTLEY CRÜE's use of taped vocals during live performances, saying, "We've used technology since '87." He added the group employed "sequencers, sub tones, background vox tracks, plus background singers and us. [MÖTLEY CRÜE also taped] stuff we can't tour with, like cello parts in ballads, etc.... We love it and don't hide it. It's a great tool to fill out the sound."