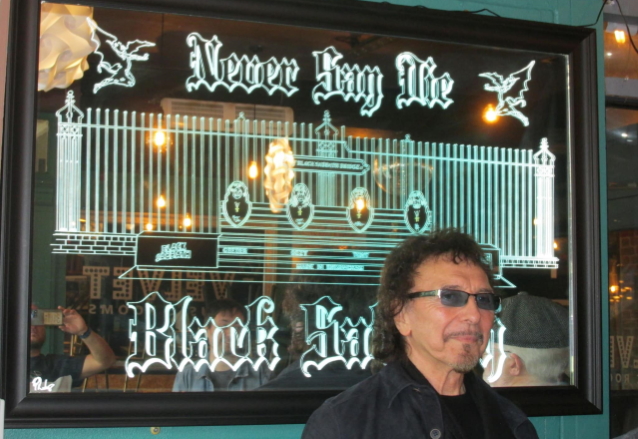 Mirror, mirror, on the wall, who's the finest band of them all? BLACK SABBATH!

A special tribute to Brummie rock music legends BLACK SABBATH has been unveiled in Birmingham. And BLACK SABBATH guitarist Tony Iommi was a special guest at Velvet Music Rooms on Broad Street to see the unusual tribute for himself.

The mirror was designed and made by BLACK SABBATH fan Paul Riding, who originally created it for an art exhibition held at Velvet Music Rooms.

Tony, who made his visit after he had been sent a picture of the mirror, said: "This is the first time I've seen it for real and it's fantastic. I love it. I am going to put it up in my studio."

Paul, who engraved the mirror by hand, said: "I'm absolutely thrilled that my work will now adorn a room in Tony Iommi's studio. What an honor! I've been an avid BLACK SABBATH fan since the 1980s. 'Never Say Die!' is one of my favorite songs, so it had to be on there."

Mike Olley, general manager of Westside Business Improvement District (BID),said: "We are buying the mirror as a special gift to Tony for all the work he has done for the BID and Birmingham as a whole. He has, and continues to be, a fantastic ambassador for Westside and his home city."

After seeing the mirror at Velvet Music Rooms, Tony bumped into novelist Paul Finch who was at Velvet for a separate art event. Paul gave Tony a copy of his latest book.

Tony's contributions to the BID include a special guest vlog recording in June this year in which he wrote about his early life as a welder and engineer. He was also heavily involved in approving the now-famous BLACK SABBATH bench, which he and bandmate Geezer Butler unveiled in June 2019.

After the visit to Velvet, Tony then toured Broad Street with Mike Olley and enjoyed sitting on the BLACK SABBATH bench again.

On a city-wide level, Iommi, whose name is also on the Broad Street "Walk Of Stars", played a major part in the opening ceremony for this year's Commonwealth Games at Alexander Stadium.

Mirror, mirror, on the wall, who’s the finest band of...