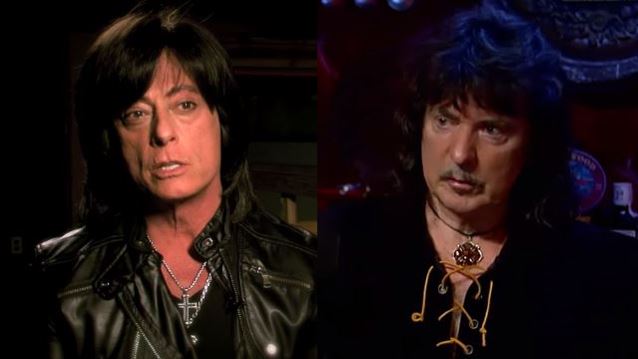 Former RAINBOW and DEEP PURPLE singer Joe Lynn Turner says that he is still "scratching [his] head" about why Ritchie Blackmore has chosen to go out and perform the two bands' classic material with a new group musicians instead of reforming RAINBOW with a more "authentic" lineup.

Turner — who fronted RAINBOW from 1980 until 1984 and was a member of PURPLE from 1989 until 1992 — made his latest comments during an appearance on "Tom & Joe's Hard Rock N' Sports", insisting that "it would have been better for the fans" if Ritchie had gone along with Joe's idea of using well-known musicians who had previously played with Blackmore.

Joe said (hear audio below): "I was out there for over a year saying he was gonna do this. And nobody believed me — they called me delusional, they called me full of it… they called me all kinds of things. They called me a fool. Meanwhile, I'm talking to [Ritchie's] management and all of this is going down, and we were trying to put this together. But I have to say what happened was, I wanted an authentic reunion. I wanted original members of RAINBOW from any and every era. Meaning, like, Bob Daisley from MOTHER'S ARMY was in RAINBOW in the first… inception. Right? And I'd get Bob Daisley on bass. Or because we lost Jimmy Bain recently, etc. etc. I'd get Bobby Rondinelli back on the drums. Maybe we'd get Don Airey. Maybe even Roger Glover would show up. I wanted Doogie [White], Graham Bonnet, all these guys. I wanted a big kind of show for a RAINBOW reunion. Go out in style. I was talking to Rick Franks over at Live Nation; he had huge interest. I was talking to Universal Music Group; they were gonna put out box sets. We had all of this lined up. And [Ritchie] just blew it off. Now, you might ask why. I'm scratching my head about the same thing: why? There's a couple of reasons, and I won't go into it, because I don't wanna be disparaging to anyone, but you can only surmise it. But I thought it was pretty nasty the way I found out. I never even got an e-mail back from his management saying, 'Okay, we're not gonna be using you. We're gonna be using some unknown guys.'"

He added: "Look, I'm happy for Ritchie. I hope it works for him. Whatever. I'm very blessed and happy that I've got my own career. I'm very busy. So more power to him."

Turner saved some of his harshest comments for people who bashed him online for talking up RAINBOW's comeback before it became apparent that he was telling the truth. He said: "You know, you've got all these trolls online and you've got all these haters and you've got all these people who think the power of the Internet now gives them opinions, it gives them this power, makes them feel more important or something, and you're getting called delusional. But not one comment came back after he did return and he did playing rock [again] — regardless of [whether it was] with me or without me — and said, 'Joe Lynn Turner was right.' That's what pisses me off — that these same people couldn't come back and say, 'Hey, you were right all the while.' So you know what I do? I fluff it off. It comes right off my shoulder, man. I don't care about it. It don't bother me. You know, it really doesn't. It just amazes me what really is happening out there today, [with] all these opinions and things, and yet it turned out to be untrue. Fine. Now you see the truth. With me or without me."

Ritchie will perform RAINBOW and DEEP PURPLE material at three shows this year in Europe. The U.K. concert will take place on Saturday, June 25 at the Genting Arena in Birmingham. The performance will be Blackmore's first U.K. rock show in over 20 years. The two concerts in Germany will take place at the Monsters Of Rock festival on Friday, June 17 at Freilichtbühne in Loreley and on Saturday, June 18 at Festplatz am Viadukt in Bietigheim-Bissingen.