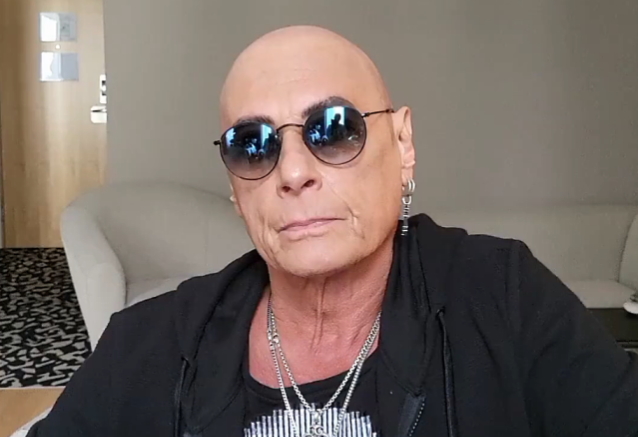 JOE LYNN TURNER On Challenges Of Pandemic-Era Touring: 'I Don't Know Where We're Gonna End Up With This'

In a new interview with Rockin' Metal Revival, legendary hard rock singer Joe Lynn Turner (RAINBOW, DEEP PURPLE, YNGWIE MALMSTEEN) touched upon the fact that inflation and the surplus of shows in the pandemic era has affected sales for most tours, with musicians not only competing with one another for venues but also sometimes playing in the same city on the same night.

Joe, who is promoting his new album "Belly Of The Beast", said (as transcribed by BLABBERMOUTH.NET): "Right now I'm getting calls from a lot of names that you would recognize. And I'd say, 'How was the gig?' And they'd go, 'Well, it was, like, half attended,' because people don't have any money. And a couple of promoters kept canceling too, because they couldn't make the insurances and the rental and the security and all the things that go with renting a venue.

"So what I'm saying to you right now is since the economy is in the toilet, I don't know where we're gonna end up with this," he continued. "I know everybody's anxious to get out there. The big shows seem to work, because everybody saves up for the big show and the stadium shows — like DEF LEPPARD and MÖTLEY [CRÜE] and all that — but when you've got the medium-sized venues and things, I don't know; it's half attended sometimes or what. So let's see where the world is at that point. With any luck at all and God's blessing, we might just get back on our feet here. But I have to be conscious of that, realistically."

Joe founded FANDANGO in 1977 and sang for the band for four records before RAINBOW guitarist Ritchie Blackmore rang. His vocals powered the seminal "Difficult To Cure" in 1981, going gold in the U.K., France, and Japan in addition to cracking the Top 50 of the Billboard 200 and Top 3 on the U.K. albums chart. A year later, he ignited RAINBOW's "Straight Between The Eyes", which Guitar World retrospectively hailed as one of "The 25 Greatest Rock Guitar Albums" of 1982. It also spawned the Hot 100 hit "Stone Cold". During 1988, a Polygram VP wanted Turner to extend his writing and singing skills to collaborate with legendary shred virtuoso Yngwie Malmsteen for his project RISING FORCE. Their album, "Odyssey", scaled the Top 40 of the Top 200, marking Malmsteen's highest bow on the respective chart and going gold in Sweden. Not long after, he reteamed with Blackmore for DEEP PURPLE's "Slaves And Masters" (1990),reaching gold status in Switzerland and Japan.