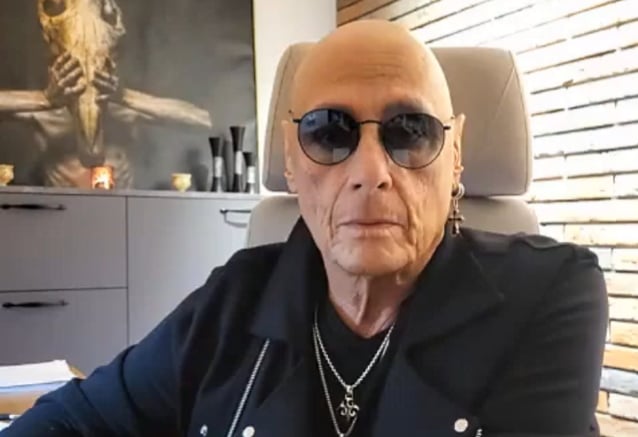 Joe Lynn Turner says that he is "comfortable" being seen in public without the hairpiece he has worn since the age of 14 after being diagnosed with alopecia at three years old.

The former RAINBOW and DEEP PURPLE singer, who turned 71 in August, went public with his new look in a series publicity images released to promote his latest solo album, "Belly Of The Beast". In a press release for the LP, Joe said that he started wearing the wig to deal with "emotional and psychological damage from cruel bullying in school."

In a new interview with Metal Talk, Joe spoke about what it has been like finally ditching the wig after all these years. He said: "I lost my hair at three years old, and I'm in the medical books because of that. People who get alopecia totalis, or whatever that type of alopecia is, usually get it in their thirties to forties. Men and women. So at three years old, that was remarkable. I found a doctor when I was nineteen, and he started to give me a certain type of steroid injections, and I started to grow facial hair and body hair. I also had a moustache and beard for a while, which didn't look very good. They actually put me on display at the Mayo Clinic in New York, where all these doctors came in with their clipboards, taking notes to see how he did this because it was medical history at that point. Nowadays, they actually have a drug or something that will grow hair, but the side effects are supposed to be a little dangerous, and I'm too old for that. I don't need that. I like the way I look. I'm comfortable with it now.

"As far as the people I've worked with, when I walked in to audition for RAINBOW, Ritchie Blackmore and Roger Glover were at the board at the studio," he continued. "One of the first things Ritchie said to me was, 'Do you take your hair off to wash it or do you leave it on?' And I said, 'Either way.' So he said, 'All right. Fair enough, Get in there and sing.' And, obviously, I got the job. So I guess that answers one question of how other people took it. Nobody, at least the people that I worked with, seemed bothered at all. In fact, they were very protective in a way. I'll never forget one time when Glenn Hughes and I were with HTP [HUGHES TURNER PROJECT], we were on the road, and there was one bully, you know, and he was giving me some kind of shit. I mouthed off to him and everything else, but Glenn just got in the way and said to him, 'Look, I'll kick your fucking ass if you don't leave him alone.' And I was, like, 'Wow. Hey, Glenn, you don't have to do all that, you know? I've been fighting my battles for years.' But I was really impressed, and I love him. To this day, we're great friends.

"So, my people loved it, but there were a few haters out there that were always mocking me, making fun of me," Turner revealed. "For them, it was never really about the singing, the writing or anything. It was always about the wig, the hair, you know. [Laughs] I think it says more about them than it does me. I mean, they must have some pathetic lives to make fun of someone who's not in control of this issue. You know, it's not like I chose it.

"Anyway, it made me stronger. As the press release says, I think it made me wiser. It also made me more determined, focused, and angry. But anger is a good tool if you use it right. It's a motivator. And I think it motivated me, too, to try to rise higher than the rest. So in a way, the curse was a blessing."

Turner previously discussed his decision to drop the wig in an interview this past September with the "Rock Of Nations With Dave Kinchen And Shane McEachern" podcast. At the time, he said: "It's absolutely liberating. First of all, I'll give a little background. It was an open secret. It wasn't like I was trying to fool people or ever denied it or anything. In fact, I never thought it was that important, but certain, shall we say haters, or whatever, these bigots, these bullies, they would always take a shot at me, which I always thought they were just pretty jealous, really, to be honest with you. And then it said more about them than it does me. That's not my kind of people. What about the music? That's what's important."