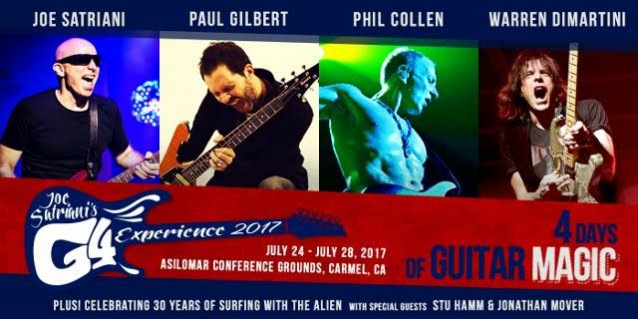 About this year's camp, Satriani says: "I'm thrilled to have guitarists Phil Collen and Warren DiMartini joining Paul Gilbert and myself for this year's G4 camp. What an incredible lineup! Phil, Warren and Paul are all virtuosos with a wide range of professional experience in the music world. Together, we look forward to sharing all of our musical knowledge with this year's G4 campers."

Collen echoes that sentiment, saying: "I'm thrilled and honored to be joining Joe on the G4 experience and I'm stoked to get to play with him and to share some of my experiences with all the attendees."

For its fourth installment, the G4 Experience enjoys a game-changing and historic first. The camp will celebrate the writing, recording, and performance of Satriani's seminal Grammy Award-nominated, platinum-selling 1987 epic "Surfing With The Alien" — one of the most successful instrumental guitar albums ever made. Recognizing the record's 30th anniversary, campers will enjoy the once-in-a-lifetime opportunity to pull back the curtain on the album with the visionaries behind the music.

Satriani will be joined by longtime co-conspirator and "Surfing With The Alien" co-producer John Cuniberti in addition to other special guests. His original live band during the record's tour cycle, Stu Hamm and Jonathan Mover, return for the first time since 1995 for the evening's performances.

For more information on G4, go to this location.