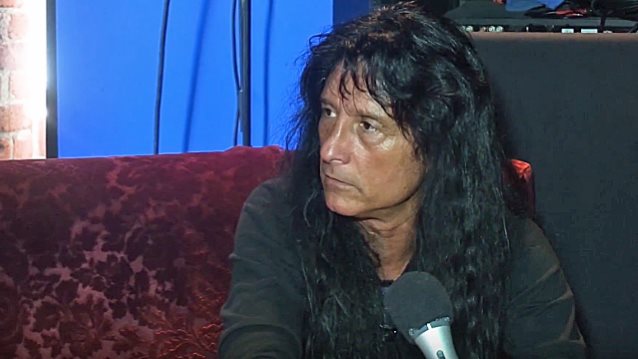 JOEY BELLADONNA On Not Singing On ANTHRAX's 'Sound Of White Noise': 'That Will Always Haunt Me'

Roy Turner of TrickyKid Radio recently conducted an interview with ANTHRAX frontman Joey Belladonna. You can watch the full chat below. A few excerpts follow (transcribed by BLABBERMOUTH.NET).

On maintaining a high level of performance over a long period of time:

Joey: "I just love music a lot. I strive on getting better; I work at it all the time. I'm real conscious of just elevating my vocals and just being in a band…I don't want to go out there and not do it well. That's why I'm always trying to do it better. I always try. I have a cover band too. I also do that on the side. We do four hours of classic rock."

On whether he's singing better now than he was in the '80s:

Joey: "I really focus. I really try. I'm not in fear of anything right now. Back in the day when I first started, I didn't know the music so well. Vocally, it was really a challenge to just find a way to sing over that stuff. Because I like to sing so I'm not going to do something outside of all the new styles you hear now, it's just finding a way to make it comfortable and legible and fun to sing as I can. You realize there's a lot of words in our stuff and the keys and the speed…it's real hard to sing over that stuff and make it work."

On which era of ANTHRAX he feels most nostalgic about:

Joey: "The first one [1985's 'Spreading The Disease'] and 'Among The Living' [1987], too, but there's nothing like the first one, joining a band, or at least getting asked to join a band that I've never heard of or heard that music in my life and thinking this is where I need to be."

Joey: "I saw that they were really professional. I liked their whole style of what they were trying to do. They seemed like they had it together. It was the first band that I've ever saw for real that was trying to do something on a level that was big like I wanted to do. Most of the stuff I was doing, it was just a lot of local people, just banging some songs out there, but nothing really serious enough where they could care less if they didn't go far."

On whether he shares the same negative feelings as ANTHRAX guitarist Scott Ian over 1988's "State Of Euphoria":

Joey: "I'm not negative toward the album. I agree with the rush part of it. A lot of records I did, I come in later and I don't know where I come in until I come in there and do it. Then at that point, the song is always done in the format and writing part of it. There's no changing anything. Whatever I have to sing over is that. Again, some of the songs are a bit quirky, but when you look back and listen, they're cool tunes. Whether it's the band's favorite and stuff like that, that's one of the bigger questions. I don't hate the album. I think there's a lot of good songs."

On whether he felt any trepidation over being asked to perform John Bush-era ANTHRAX songs:

Joey: "Personally, I felt we had enough music. I was just trying to be a champ and try something. For some reason, when we get that rivalry crap that went on, it bugs the shit out of me. I have nothing against him or nothing against them. I don't sit around and have a grudge, but I didn't want to try… It's hard enough when you do covers but doing something with the singer of the old [version] of the band. He had it rough, because for the sake [of it], he had almost to do older songs because then they'd really be fighting the good fight there. For me, I didn't want to get too involved with doing that. I didn't want to keep opening that door and what was I trying to prove? I'm glad I don't have to. I just don't really feel like it. I could, I'm sure, I always felt, nothing against those songs, forget you ever heard them, we could have done any of those records and I think they would have been cool. We don't know because I never did them before other than that."

On imagining how 1993's "Sound Of White Noise" would have sounded with his vocals:

Joey: "That will always haunt me. The fact that those 13 years went away and they're gone. They're just gone. Maybe I just feel good about it now, right? With all the crap… I could add to this, but at the end of the day, it's all good. I'm really glad for the fans too, and even myself, I'm proud, but I also love that people are enjoying it and all of these new people are coming up and get to see what was there before."

ANTHRAX and KILLSWITCH ENGAGE kicked off "The Killthrax Tour" on March 29 at the Wellmont Theater in Montclair, New Jersey. The tour wraps up on May 7 at the House Of Blues in Boston, Massachusetts.