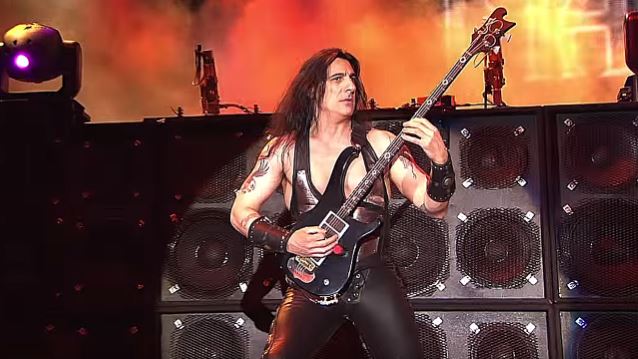 Finland's Kaaos TV recently conducted an interview with MANOWAR bassist Joey DeMaio. You can now listen to the chat in the YouTube clip below. A couple of excerpts follow (transcribed by BLABBERMOUTH.NET).

On the recent passing of MOTÖRHEAD leader Lemmy Kilmister:

Joey: "Well, Lemmy was a friend. He was a great person, but he was also a friend. And, of course, I always loved his bass playing and his songwriting. And he wasMOTÖRHEAD, let's face it. So, yeah, it has a terrible impact. You know, we have now seen and talked to a lot of the MOTÖRHEAD fans, because most of the MOTÖRHEAD fans are MANOWAR fans as well. And I was talking to quite a few fans at the shows recently, and they're, like, 'Oh my God! We want you guys to live forever. We couldn't take it if anything ever happened to MANOWAR. We lost Lemmy.' We said, 'Yeah, we understand.' And we wanna keep on playing and do what he did — just play your whole life. I mean, this guy played right 'till the end, you know what I mean? And you have to admire that. That's why we always had mutual respect for each other."

On whether there are any newer bands that could take over once groups like BLACK SABBATH, METALLICA and IRON MAIDEN are no longer around to headline festivals:

Joey: "Well, there's always gonna be people that are great musicians. There's always gonna be people are seen as heroes to their fans. But this generation of musicians that I am from, and the generation ahead of me — the Ronnie Dios and so forth — there will never be people like us again, because we grew up in a different time of music and a different time in metal. So, therefore, you're based on what your influences are, but also what the scene is. We were so lucky that we grew up right the middle of the explosion of metal, and there were just so many great bands. I mean, I don't hear another JUDAS PRIEST out there, do you? I don't hear another MANOWAR, and another KISS. You know what I'm saying? I don't think there's gonna be one. Of course there's gonna be metal, there's gonna be rock bands, there's gonna be metal concerts, and people are always gonna go have fun, but there's a reason why the bands that are out there now, you know, we're the headliners of these big shows. There's a reason for it. There aren't many of us out there that are able to put forty thousand people on the ground."

Joey: "Well, I think that we started out to be the kind of band that wants to play our whole lives. We also wanted to write songs that made people feel good about themselves, not bring themselves down. And we have a strong sense of loyalty to our audience, and honesty. You know, like if I break a string or my guitar's out of tune, I'll just stop the show and say, 'I'm sorry. I'm out of tune. Hang on a sec.' And I think people really appreciate that. Somebody else might just keep on playing and not give a shit — get their money and leave. I think that's a big part of it. And also the fact that we love our fans. And I'm the only guy I know that signed a recording contract in blood. So I think that when you show people you're committed, you're dedicated and you do it for a number of years, and you keep on doing it, and you don't change and fuck your fans over... People know they can trust MANOWAR to get their head fucking blown off with extreme metal."

MANOWAR's "Gods And Kings" world tour celebrates "Kings Of Metal MMXIV", which many fans haven't had a chance to experience live yet, as well as the upcoming anniversary of "Gods Of War", which was unleashed on the world in 2007. The setlist is packed with fan favorites from both albums, plus many other classics and special surprises.