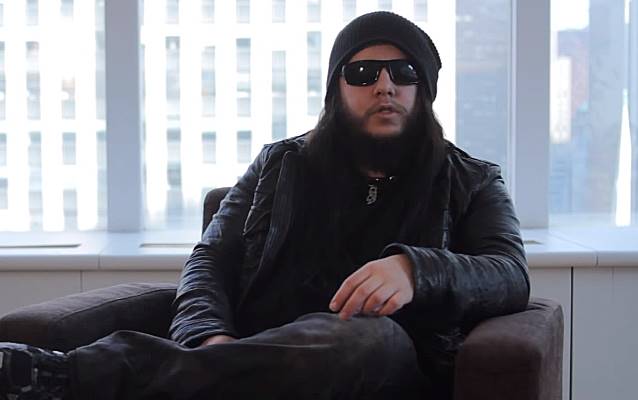 JOEY JORDISON: 'I Did Not Quit SLIPKNOT'

"To my fans, friends, and associates… I would like to start the New Year by addressing the recent rumors and speculation regarding my departure from SLIPKNOT.

"I want to make it very clear that I DID NOT QUIT SLIPKNOT. This band has been my life for the last 18 years, and I would never abandon it, or my fans.

"This news has shocked and blindsided me as much as it has all of you.

"While there is much I would like to say, I must remain silent to further details at this time.

"I would like to thank you all for your unwavering love and support, and wish everyone a very happy and healthy New Year."

SLIPKNOT singer Corey Taylor posted a message on Twitter on December 29, dispelling rumors that the band is finished following the departure of drummer and founding member Joey Jordison. Taylor wrote, "For those who think the KNOT are falling apart, you are greatly and sadly mistaken. Bring on 2014. Great things are coming. Stay tuned . . . "

Ironically, Taylor himself has often been cited as the member of the band most responsible for the delays in making a new album, as he wrote, recorded and toured three full records with STONE SOUR in the past three years.

But Taylor told The Pulse Of Radio not long ago that he thought 2014 would be the year that SLIPKNOT came back with new music. "I know everybody is pretty keen on getting together and seeing what happens next year, so I mean, if it takes us a year to write an album, so be it," he said. "The main goal is to just get us in the room and just see what happens, you know. If we can get past that first day, I think it'll come together. Now that we're all kind of in better places in our lives and whatnot, it's making it a little easier to be excited about it again. It's just starting to feel like it's time."

SLIPKNOT announced that it was parting ways with Jordison on December 12, saying in a statement, "We understand that many of you will want to know how and why this has come to be, and we will do our best to respond to these questions in the near future."

SLIPKNOT bassist Paul Gray, also a key songwriting in the band, died in May 2010. The band's last album was 2008's "All Hope Is Gone".

SLIPKNOT is slated to begin work on a new album in January 2014.