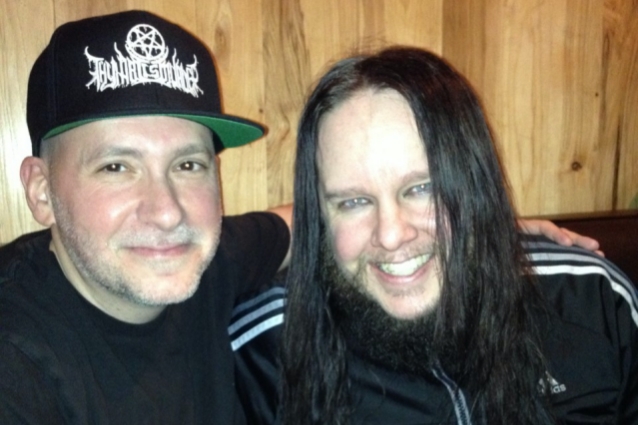 Monte Conner, the music industry veteran who signed SLIPKNOT to Roadrunner Records, has paid tribute to Joey Jordison, calling him "a truly groundbreaking character who will be sorely missed by metal fans worldwide." The founding SLIPKNOT drummer's family confirmed that Jordinson passed away "peacefully in his sleep" on Monday (July 26) of an unspecified cause. He was 46 years old.

In an essay for Variety, Conner wrote in part: "Joey Jordison was one of the most talented musicians I've ever had the pleasure of working with. Fans know him for his explosive, no-holds-barred drumming style, but most don't realize he was also a gifted songwriter, arranger and guitarist who understood the art of crafting huge choruses and hooks. Along with the band's bassist, Paul Gray (who died in 2010),Joey wrote the majority of the band's music, with vocalist Corey Taylor adding the unforgettable lyrics that would resonate with and speak to the 'Maggots,' as the band called their fans."

Conner also recalled his first meeting with Jordison, saying: "He not only had a vast knowledge of extreme and underground heavy metal, but he was an encyclopedia on all things Roadrunner Records. He wanted to talk about DEICIDE, OBITUARY, SUFFOCATION, SEPULTURA and all his favorite bands on the label, and hear some insider stories. He knew as much about Roadrunner's roster and history as I did, if not more — and I'd been with the label since 1987."

Monte, who is currently VP of A&R at Nuclear Blast Records, concluded: "Joey was a truly groundbreaking character who will be sorely missed by metal fans worldwide. I feel incredibly lucky to have been a part of his all-too-short but seismic journey."

Jordison's family released a statement on Tuesday in which they wrote "To those that knew Joey, understood his quick wit, his gentle personality, giant heart and his love for all things family and music."

The family will have a private funeral service.