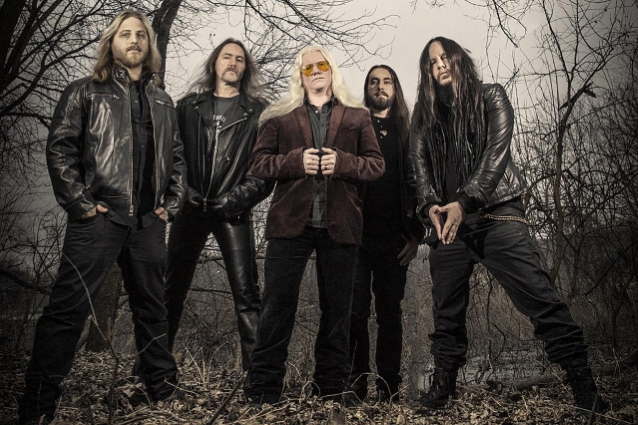 Joey Jordison says that his band VIMIC is still "one hundred percent active" despite the fact that the group's Facebook page hasn't been updated in a year.

In October 2017, it was announced that VIMIC had signed a global deal with Universal Music Enterprises (UMe) and T-Boy Records, UMe's label partnership with rock manager Andy Gould. The band's debut album, "Open Your Omen", was set to be produced by Jordison and Kato Khandwala (MY CHEMICAL ROMANCE, THE PRETTY RECKLESS),with mixing and mastering assistance from MEGADETH's Dave Mustaine, who guested on "Open Your Omen"'s first single, "Fail Me (My Temple)".

Jordison, who recently completed a European tour with the international death metal supergroup SINSAENUM, was asked about VIMIC's status in a brand new interview with Australia's "Wall of Sound: Up Against The Wall" podcast. He said (hear audio below): "Oh, VIMIC still exists — one hundred percent. It hasn't gone anywhere. That band's not broken up; it's one hundred percent still in existence. We're just… Right now, you've gotta go where the opportunity is available. And VIMIC is still one hundred percent active."

Jordison recently confirmed that he is working on his first-ever book. The 43-year-old musician's memoir will arrive several years after he overcome the neurological condition acute transverse myelitis, an inflammation of the spinal cord which damages nerve fibers, which ultimately led to the drummer temporarily losing the use of his legs.

Jordison, SLIPKNOT's drummer from 1995 to 2013, revealed his fight with the seldom-seen neuro-immune disorder more than two years ago while appearing at the Metal Hammer Golden Gods Awards in London, England. He later claimed that he was visited by only one member of SLIPKNOT while he was in the hospital battling the disease. He also said that SLIPKNOT fired him because "they thought I was fucked up on drugs."