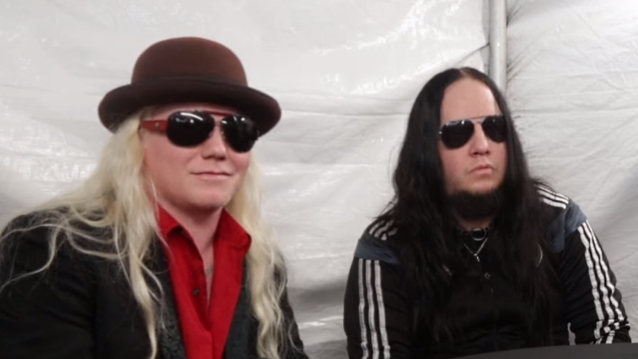 In a new interview with IndiePower.com, vocalist Kalen Chase spoke about the current status of VIMIC, his collaboration with Joey Jordison.

In October 2017, it was announced that VIMIC had signed a global deal with Universal Music Enterprises (UMe) and T-Boy Records, UMe's label partnership with rock manager Andy Gould. The band's debut album, "Open Your Omen", was set to be produced by Jordison and Kato Khandwala (MY CHEMICAL ROMANCE, THE PRETTY RECKLESS),with mixing and mastering assistance from MEGADETH's Dave Mustaine, who guested on "Open Your Omen"'s first single, "Fail Me (My Temple)".

Two and a half years after VIMIC's Facebook page was last updated, with no word of a possible release date for the aforementioned LP, Chase stated about the group (see video below): "When [Joey] started [the project], originally the band was called SCAR THE MARTYR. And we had talked about doing something [together], but 'cause it was a side project and I was trying to do something big, he went with somebody else. When he stopped being in SLIPKNOT and he wanted to do the band full-time, he had called me and asked me to do it. And, of course, I said yes, 'cause we always said we were gonna do a band together in 2007 when we were hanging out on the bus [while we were both on the road with KORN]. And it was a beautiful thing. We wrote a ton of songs and recorded them. Hopefully the album will come out, but the five songs that have been put out, I'm glad people are enjoying them. We got to do a few shows. We played South America [and] Europe, and it was a really great thing. And I was very happy that we had that time together."

Asked if he had any insight into the reasons for Joey's split with SLIPKNOT, Kalen said: "It's so hard to say, 'cause we were separated for so long. We'd talk on the phone, and we really didn't get into those grimy details. It just seemed like it was time for a change on both sides. And I know several of the guys in SLIPKNOT and Joey, and I think they're all good people. When you know people and you've been together for so long, things change, attitudes change. I know that it was a little sticky for a while, but I hope and believe that there's no bad blood. I think Joey just needed to try something different, and I think we had a lot of good times and good, creative stuff. And whatever Joey's working on now, I'm sure it's gonna be fantastic."

Jordison, SLIPKNOT's drummer from 1995 to 2013, revealed his fight with the neurological condition acute transverse myelitis, an inflammation of the spinal cord which damages nerve fibers, in 2016 while appearing at the Metal Hammer Golden Gods Awards in London, England. He later claimed that he was visited by only one member of SLIPKNOT while he was in the hospital battling the disease. He also said that SLIPKNOT fired him because "they thought I was fucked up on drugs."