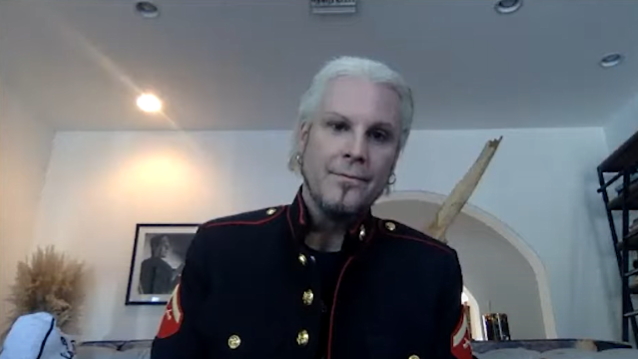 During an appearance on MACHINE HEAD frontman Robb Flynn's "No Fuckin' Regrets With Robb Flynn" podcast, former MARILYN MANSON and current ROB ZOMBIE guitarist reflected on the one and only time that he consumed an alcoholic beverage while on the road. He said (as transcribed by BLABBERMOUTH.NET): "The only time I ever had a drink — the only time — is we were on tour, it was [Marilyn Manson's] 'Mechanical Animals' tour, and PANTERA would always come. As you know, here they come. And it was really late, so I was in bed; I was curled up [in my bunk] sleeping. And we had to get to the next city. And they were, like, 'Okay, we've gotta go.' And Dime's [PANTERA guitarist 'Dimebag' Darrell Abbott], like, 'I'm not leaving until we do one more shot.' And so they were, like, 'Okay, let's do another shot.' He goes, 'Go get 5. He's gotta do a shot.' [They were, like], 'He doesn't drink.' [And Dime said], 'I'm not leaving until he gets out here and takes a shot.' And so I had to get up — 'cause I wanted to go too. And it was that 'Black Tooth [Grin]'," John 5 said, referencing Dimebag's signature drink, named after a lyric from MEGADETH's "Sweating Bullets", which was essentially a double shot of Seagram's 7 and a double shot of Crown Royal tossed over ice (or not) and splashed with just enough Coca-Cola to give it a darkened hue. "So I drank that and I thought I got stabbed in the stomach… But that was the only time I ever had a drink."

The guitarist's death was a devastating blow to the close-knit hard rock and metal community. He was known to his fellow musicians for his hospitality, friendship and partying spirit, and was a legend among fans and peers for his powerful, innovative and unmistakable playing style.

Dimebag's brother, PANTERA drummer Vinnie Paul Abbott, died in June 2018 at the age of 54 in his sleep at his home in Las Vegas. The official cause of death was dilated cardiomyopathy, an enlarged heart, as well as severe coronary artery disease.