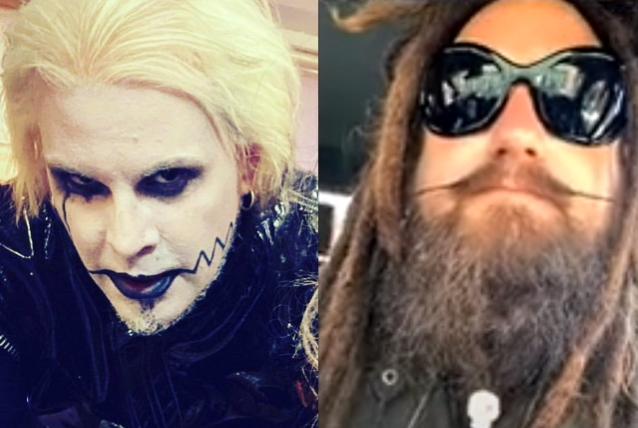 ROB ZOMBIE was rejoined by guitarist Mike Riggs for the band's concert last night (Thursday, October 6) at the Aftershock festival in Sacramento, California. It marked ZOMBIE's first live gig since the September 24 performance at Louder Than Life festival, which featured longtime member John 5 on guitar.

ROB ZOMBIE frontman and namesake didn't address John 5's status with the group while introducing Riggs from the stage at Aftershock, simply telling the audience that Mike had returned "after a 20-year absence" to play the gig.

According to Rock Feed, John 5 and Rob Zombie "no longer follow each other on social media," lending credence to the theory that John 5 is no longer a member of Rob's band.

Riggs had previously spent six years as a member of ROB ZOMBIE. Riggs joined forces with Rob in the '90s and stayed with him into the early 2000s, eventually leaving in 2004 (when Rob Zombie was largely focusing on films rather than music) to start a project of his own. Riggs songwriting and crunching guitars can be heard on Rob Zombie's "Hellbilly Deluxe", "American Made Music To Strip By", "The Sinister Urge" and "The Past, Present & Future" records.

More recently, Riggs has kept busy with his band SCUM OF THE EARTH, named after a song from "Sinister Urge". SCUM OF THE EARTH favors the sort of rhythmic, industrial-influenced, mildly funky, hip-hop-minded alternative metal that Riggs honed during his initial ROB ZOMBIE days.

John 5 has played with ROB ZOMBIE since 2006 when he was invited to join the band for a short Ozzfest tour. Despite being told "not to get too comfortable", the pairing brought a resurgence in Zombie, who at the point was turning his hand to directing movies and taking a break from music, they began work on 2006's "Educated Horses". As a consequence, John 5 had to make the decision to leave his fledgling band LOSER.

John 5 had worked with Zombie for the last 16 years, co-writing on all studio albums since "Educated Horses", and composing the score for Zombie's 2013 movie "The Lords Of Salem".

Over his career, John 5 has worked with many artists across a variation of music genres. As well as being the axeman for Marilyn Manson, Rob Zombie and Rob Halford, John 5 has written and played with musicians ranging from MÖTLEY CRÜE to Tina Guo.